K10: Rump: The True Story of Rumpelstiltskin by Liesl Shurtliff 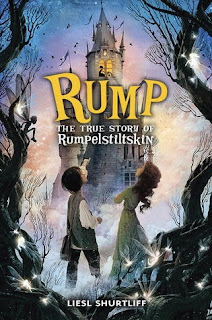 What book did you read and why did you choose it?
I read RUMP and I picked it because I like fairy tales.

Can you describe this book in one word?
Magical.

What was your favorite part of this story?
I liked it when Rump found the spinning wheel in his backyard.


If you had a problem similar to the main character's problem, what would you do?
Rump was in a rumpel. I would try to get out of it without using magic.

What would you say to your best friend to convince them to read this book?
Hey! Do you like fractured fairy tales? Then read RUMP because it's a fairy tale that you probably don't know.

What do you think about the book's cover?
I thought it was really creative. I liked how the background colors near the tower blended into each other. I also liked the pixies all over it.

Would you want to read another book about these characters? Why or why not?
Yes, especially a story about Red.

Can you name another book that reminds you of this one?
No. I've never read a story about Rumpelstiltskin before.

If you could ask the author one question about this book, what would it be?
When you got the idea for RUMP, did you start writing right away or did you work on the idea for a while?

We contacted Liesl Shurtliff and asked her Grant's question. Here was her reply:
I worked on the idea for RUMP for a while, probably a few months. I scribbled down ideas in a notebook, and when I felt like I had a good sense for Rump's character and his journey, I started writing.


***
Thank you to Grant and Liesl for sharing Rump's story with The Kidliterati!
***

Rump: The True Story of Rumpelstiltskin by Liesl Shurtliff
In a magical kingdom where your name is your destiny, 12-year-old Rump is the butt of everyone's joke. But when he finds an old spinning wheel, his luck seems to change. Rump discovers he has a gift for spinning straw into gold. His best friend, Red Riding Hood, warns him that magic is dangerous, and she's right. With each thread he spins, he weaves himself deeper into a curse. To break the spell, Rump must go on a perilous quest, fighting off pixies, trolls, poison apples, and a wickedly foolish queen. The odds are against him, but with courage and friendship--and a cheeky sense of humor--he just might triumph in the end.