K.L. Going is the author of numerous books for children and teens, including Fat Kid Rules the World, which was adapted into an independent film directed by Matthew Lillard. As with most writers, her ‘overnight success’ was years in the making. Before becoming published in several countries, K.L. worked in different aspects of the book world.

“Since graduating college I've worked as an adult literacy tutor, a ticket agent for an airline, a front desk clerk at a resort hotel, an assistant to two agents at a Manhattan literary agency, and a manager of an independent bookstore.”

Her first novel, Fat Kid Rules the World, was named a Michael Printz Honor Book by the American Library Association and was included on YALSA’s Best Books for Young Adults list. Including her debut, K.L. has published three novels for young adults, two for middle grade readers, two picture books, and a book on the writer’s craft. While she has always loved writing, she didn’t always want to be an author.

“As a kid, I was always writing stories for fun, but I didn't plan on being an author. I was planning on joining the Peace Corps. Writing was something I did for pleasure. I wrote my first complete book in high school. It was a fantasy novel. After that, I was always working on something. It wasn't until much later when I got a job in publishing that I first considered submitting my work for publication.”

For the readers of Kidliterati, K.L. had this inspiring secret to share about the craft of writing.

"I believe the secret to any good writing is to write with heart. When writing for young readers, I try not to think about limitations, but rather to focus on what is universal -- the things that move each and every one of us, regardless of our age."

When asked about the craft of writing for young readers, K.L. gave some interesting clues about how to create complex characters.

“I always aim to make my characters imperfect – almost unlikeable at first – because the farther a reader has to travel to love a character, the more redemptive the entire process is for them. But this is tricky. A character can’t be too unlikeable or the reader won’t get hooked into the story. My goal is to make my readers uncomfortable without turning them off completely and to make a character flawed, but also sympathetic.” 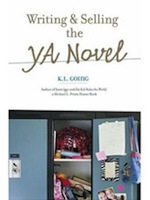 K.L. lives in Sullivan County, NY where she both writes and runs a business critiquing manuscripts. When asked about the most common mistakes that beginning writers make, she had these inside pointers to consider.

“I see a lot of common mistakes in manuscripts and some of them are so easily fixed, like lack of professional presentation, or words that repeat themselves throughout the text. Other times the problems aren’t as easily solved … one of the most common larger problems I encounter is when writers lose track of their narrator and start giving more and more weight to minor characters and subplots. It’s so important to stay focused on your main character and the story they’re trying to tell and not to let yourself get distracted.”

With multiple picture books currently under contract, K.L. Going is excited about her newest one called Pieces of the Puzzle Why. Her next book slated for publication is Pablo the Poet, which will come out later in 2013.