Secrets of Kidlit: Ode to the Writing Conference

Just this past weekend, I attended the SCBWI Midsouth Fall Conference in Nashville. (SCBWI is Society of Children's Book Writers and Illustrators, in case you were scratching your head at that acronym.) This was my fourth writing conference. And it's been worth it, every single time.

Because here's the thing about writing: it's not easy.

If you're a writer, you know what a roller coaster it can be, going from "Woohoo! I got a full request!" to "My words are literary equivalent of the milk in last week's sippy cup" in no time flat. (And if you've ever had a toddler, you know exactly what's in that three-day-old sippy cup you just found under the couch.)

If you're a writer, and you've never been to a conference, then GO.  The inspiration and community you can find is truly incredible.

I could go on and on about the general awesomeness of conferences, but instead I'll share my top three moments from SCBWI Midsouth 2013:

1) Jay Asher's Keynote Speech. So Jay Asher is the insanely talented author of Thirteen Reasons Why and co-author of The Future of Us. What I did not know is that: a) he's hilarious, and b) it took him twelve years to go from beginning writer to published author. TWELVE YEARS, people. He's no lucky-duck, overnight success story. I don't think anyone came away from this speech uninspired.

2) Bethany Griffin and Michael Bourret's panel. Author Bethany Griffin (you might've heard about her Masque of the Red Death books) and agent Michael Bourret of Dystel & Goderich Literary spoke about the agent-author relationship. But what stuck most with me was Bethany's writing journey. She spoke candidly about the difficult time she experienced between her debut book and her second book. Her honesty and perseverance touched me.

3) Sharon Cameron's Crystal Kite Award acceptance speech. I adore Sharon Cameron's book, The Dark Unwinding, and I was thrilled to hear she'd won our SCBWI division's peer-voted award. Her acceptance speech wasn't a speech. Instead, she stood at the podium and called, name-by-name, everyone who'd had some part in her journey and invited them to join her at the front of the room. By the end, she couldn't have fit one more person up there if she'd wanted to.

The picture below, of Sharon's big moment, sums up the entire conference for me. 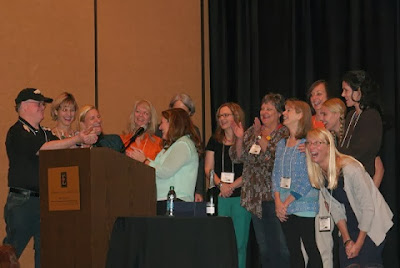