A DUDE librarian talks about YA literature!

My buddy Grant is a dude. He reads more than anyone I know, including me (I get through about 100 books a year). And perhaps the most interesting fact about him: he's a librarian, formerly of the DC public system and currently with the Kitsap Regional Library system. The fact that he's a dude librarian is awesome, because I think seeing a guy behind the library desk encourages more boys to go to the library. 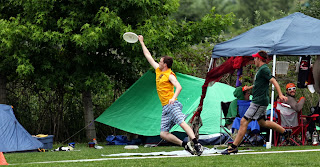 This is Grant. He and I have been playing ultimate frisbee together for a long time. He's tall. 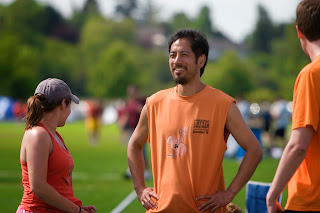 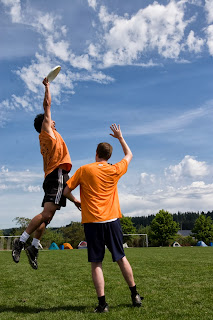 THIS IS ME JUMPING OVER GRANT!!!


Or it's me holding a frisbee and jumping over a stationary Grant while someone took a picture. Same difference.


I may or may not have smashed Grant on the head with said frisbee on the way down.

Now back to our regularly scheduled interview.

1. Currently, what genres do you find YA readers most drawn to?
Obviously it depends on the reader. Most of the YA readers I talk to are drawn to what is popular, so for now that is dystopian (thanks, Hunger Games). But within that genre, they read along their interests, whether romance (Delirium), action (Maze-runner), sci-fi (Ender's Game), etc.

Another genre that I see YA readers being drawn to is the graphic novel format. While not technically a genre (more of a medium), graphic novels are something that YA readers seem to really enjoy and seek out, whether serial graphic novel, superhero variety, or stand alone work.

2. What are your favorite three recent YA novels and why?
Unwind, by Neal Shusterman. It isn't that recent, but the sequel UnWholly is, and I believe the final book in the trilogy, UnSouled, is due out in November. Smart, well-written characters, a dystopian world that isn't that far from reality.

Tales of the Madman Underground by John Barnes, a great novel about a teen growing up in the 70's. This is quality work. I often tell people (although I am not entirely sure I believe it) that if Catcher in the Rye came out today it would be categorized as YA, as it has a teen protagonist.

Ready Player One, by Ernest Cline. Not technically YA, but it won the Young Adult Library Services Association's award for adult/YA crossover book. A super fun novel that any video game or film geek will love. Especially if you grew up in the 80s :)

4. What genre do you wish you saw more of?
I wish there were more non-genre fiction written for YA.  I don't think YA audiences need only genre material.  I enjoy genre books as well as regular fiction, but unfortunately it is a harder sell for authors, so they tend to write to what is deemed popular, which is a little sad for me as a reader.

5. How do librarians make buying decisions?
It really depends on the library. At a large library system they have such a big budget (still smaller than it should be) that they are able to buy tons of material.  At a smaller library system, the librarians need to be more selective in what they purchase and might have to forgo certain series for budgetary needs.

Generally I go off what is popular. I don't like to see huge hold queues for popular books, because I think that discourages reading.

6. What sorts of differences to you see in terms of requests from guys vs. girls?
For a lot of girl and guy YA readers, they want a protagonist who is of the same gender, and often the subject of the book reflects male/female stereotypes (romance for girls, action for boys).  But I find that many readers don't care as much and just want the genre they are interested in.


7. What's it like to be a guy librarian?
Awesome. I find that most patrons of all ages are just as likely to ask me questions, but some patrons are excited to see a guy behind a desk and will talk to me for just that reason.

Thanks, Grant! And I'm pretty sure your head was already lumpy before I smashed it in.

Email ThisBlogThis!Share to TwitterShare to FacebookShare to Pinterest
Labels: Jeff Chen, Reaching_Readers, YA