K10: The Flame in the Mist by Kit Grindstaff 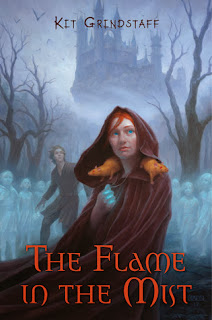 Tell us a little about yourself: what is your first name, how old are you, and what is your favorite flavor of ice cream?
My name is Anna, I am 12 years old, and I like chocolate ice cream with Oreos.

What book did you read and why did you choose it?
I read THE FLAME IN THE MIST and I chose it because the cover makes the story look adventurous.

Can you describe this book in one word?
Mysterious.

What was your favorite part of this story?
There are too many to choose just one! I loved Jemma's relationship with her pet rats, Noodle and Pie. Their relationship is much deeper than it seems at first.

If you had a problem similar to the main character's problem, what would you do?
Jemma is at the center of a plot against her family. I'm not sure what I'd do in that situation. I don't think I'd have enough courage to do what she did. She was very brave.

What would you say to your best friend to convince them to read this book?
My friends and I recommend books to each other all the time. I'd just tell them that it's really good.

What do you think about the book's cover?
I think the cover is cool and creepy. It shows where Jemma is coming from and it foreshadows events that will happen in the story.

Would you want to read another book about these characters? Why or why not?
Yes, please! I wasn't able to put this book down and I'd love to follow Jemma on another journey.

Can you name another book that reminds you of this one?
This book reminds me of Harry Potter. But instead of Voldemort going after Harry, it is the Agromonds going after Jemma.

If you could ask the author one question about this book, what would it be?
Just one?!? This book has a crazy story line, every little detail connects to others. How did you come up with the plot and make it all work together?

We contacted Kit Grindstaff and asked her Anna's question. Here was her reply:
Anna, the basic situation pretty much fell into my head all at once, something like: Girl held prisoner by weird family in a castle miles from anywhere. I was hooked! Then I began wondering: Who is this girl? Why is she there? Where did she come from? Oh, look -- there's a Mist! What's that doing? As you ask those kinds of questions, plot ideas come from the answers.

The rest unfolded from there. While writing, I kept asking myself, "What's the worst that could happen now?" That resulted in poor Jemma having a ton of adversity thrown at her! And sometimes, things took me by surprise. The scene with Feo in the dungeons, for example.

It did take a lot to make it all work together, though. With so many twists and turns, there were times I thought my head would explode keeping track of it all! I had to check over and over for consistency. Also, whenever a new idea hit me, I'd go back and seed it into earlier chapters to make sure it flowed naturally and made sense when it happened. Like the Feo scene I mentioned: it needed to be hinted at from the beginning. If you were to re-read earlier chapters, you'd see there were clues all along.

Keeping the plot unpredictable was definitely a challenge! It was worth it, though, to hear that readers enjoy its complexity. And I'm thrilled and honored that you're featuring THE FLAME IN THE MIST on Kidliterati! Thank you so much.


In addition to answering Anna's question, Kit sent us fantastic
THE FLAME IN THE MIST items for a giveaway.
Enter below to win a copy of the book, a signed bookmark,
a poster, a parchment, and a "Rattussus Rule!" button.

Thank you to Anna and Kit for sharing Jemma's story with The Kidliterati!

The Flame in the Mist by Kit Grindstaff
Fiery-headed Jemma Agromond is not who she thinks she is, and when the secrets and lies behind her life at mist-shrouded Agromond Castle begin to unravel, she finds herself in a chilling race for her life. Ghosts and misfits, a stone and crystals, a mysterious book, an ancient prophecy—all these reveal the truth about Jemma's past and a destiny far greater and more dangerous than she could have imagined in her wildest fantasies. With her telepathic golden rats, Noodle and Pie, and her trusted friend, Digby, Jemma navigates increasingly dark forces, as helpers both seen and unseen, gather. But in the end, it is her own powers that she must bring to light, for only she has the key to defeating the evil ones and fulfilling the prophecy that will bring back the sun and restore peace in Anglavia.