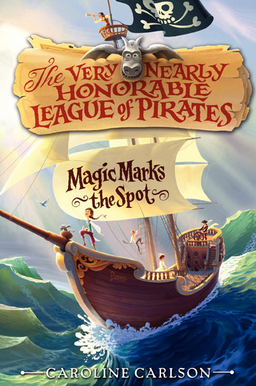 The Kidliterati Ten is an interview series with young readers. We ask them about a favorite book and hope that you enjoy their answers.
Tell us a little about yourself: what is your first name, how old are you, and what is your favorite flavor of ice cream?
My name is Morgan, I'm 11 years old, and my favorite flavor of ice cream isn't actually ice cream. It's rainbow sherbet.
What book did you read and why did you choose it?
I read The Very Nearly Honorable League of Pirates #1: Magic Marks The Spot because my mom got it for me and it looked really cool. My mom is usually pretty good at picking out books I'd like. She knows my style.

Can you describe this book in one word?
Magical.

What was your favorite part of this story?
I'm not sure I can give a favorite part without giving something away, but I can say that there are tons of twists and turns in this story.

If you had a problem similar to the main character's problem, what would you do?
Hilary really, really wants to be a pirate, but she can't because her father says she has to go to a fancy girls school and girls can't be pirates. If someone told me that I couldn't do something because I'm a girl, I'd do the same thing Hilary did and do it anyway. Girls can do everything boys can do!

What would you say to your best friend to convince them to read this book?
I would tell my best friend that this book has everything you could want... magic, awesome characters, adventure, and suspense. It will always keep your interest because there are no boring parts!

What do you think about the book's cover?
I love the book's cover because it shows the main characters. I really like when the cover has pictures of the characters, because then I can picture them more easily when I read it.

Would you want to read another book about these characters? Why or why not?
Yes! I'm very excited that this is Book #1, which means there will be a Book #2! I want to go on more adventures with Hilary and the gargoyle (he's my favorite character and I wish I had a talking gargoyle).

Can you name another book that reminds you of this one?
This book is quite unique. It's one of a kind, but if I had to pick one, I'd say Tuesdays at the Castle.

If you could ask the author one question about this book, what would it be?
I would like to know what gave her the idea to write a book about a pirate.

We contacted Caroline Carlson and here was her reply:
"I've always been interested in pirates--the fun, adventurous pirates in books and movies, not the real-life, much scarier ones. When I was growing up, I dreamed of finding a mysterious map marked with an X and searching for buried treasure. During the summers, my friends and I would go on treasure hunts all around our neighborhood. Those expeditions were so much fun that many years later, when I finally sat down to write a pirate story, I decided to send my characters on a treasure hunt of their own.

Pirates are usually known for being frightening and violent, but I prefer my pirates to be a little bit goofy and slapstick. Lots of the fun of writing MAGIC MARKS THE SPOT came from trying to put my pirate characters in as many silly situations as possible!


***
Thanks for your thoughtful answers, Morgan and Caroline!
***

Pirates! Magic! Treasure! A gargoyle? Caroline Carlson's hilarious tween novel The Very Nearly Honorable League of Pirates #1: Magic Marks the Spot is perfect for fans of Lemony Snicket's Series of Unfortunate Events and Trenton Lee Stewart's Mysterious Benedict Society.
Hilary Westfield has always dreamed of being a pirate. She can tread water for thirty-seven minutes. She can tie a knot faster than a fleet of sailors, and she already owns a rather pointy sword.
There's only one problem: The Very Nearly Honorable League of Pirates refuses to let any girl join their ranks of scourges and scallywags.
But Hilary is not the kind of girl to take no for answer. To escape a life of petticoats and politeness at her stuffy finishing school, Hilary sets out in search of her own seaworthy adventure, where she gets swept up in a madcap quest involving a map without an X, a magical treasure that likely doesn't exist, a talking gargoyle, a crew of misfit scallywags, and the most treacherous—and unexpected—villain on the High Seas.
Written with uproarious wit and an inviting storyteller tone, the first book in Caroline Carlson's quirky seafaring series is a piratical tale like no other,