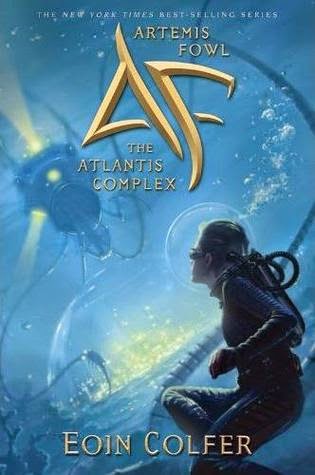 Tell us a little about yourself: what is your first name, how old are you, and what is your favorite ice cream flavor?
My name is Nic, I'm 10, and my favorite flavor of ice cream is chocolate.

What book did you read and why did you choose it?
I read Artemis Fowl: The Atlantis Complex. I chose it because it was the seventh in the Artemis Fowl series and I was enjoying the series.

Can you describe this book in one word?
Mastermind plot- oh, that’s two words. I’m trying to think of a word that means “sinister and mysterious” and all that other stuff.... Interesting.

What was your favorite part of this story?
I like the part where one of the main characters (Butler) went to rescue his sister.

If you had a problem similar to the main character's problem, what would you do?
I would do exactly the same thing.

What would you say to your best friend to convince them to read this book?
My best friend has read the first book in the series and this one is way better, so I’d say if he liked the first one, he should read this one.

Would you want to read another book about these characters? Why or why not?
Yes, there is another book in this series. This was a stronger book and the way of writing changed from the first through the seventh book in the series. I’d like to see another one.

Can you name another book that reminds you of this one?
It’s hard to match his style of writing. Maybe 100 Cupboards by N. D. Wilson.

If you could ask the author one question about this book, what would it be?
Why did you make the main character have this sickness instead of another sickness?

Artemis Fowl: The Atlantis Complex by Eoin Colfer
When Artemis commits his entire fortune to a project he believes will save the planet and its inhabitants, both human and fairy, it seems that goodness has taken hold of the world's greatest teenage criminal mastermind. But the truth is much worse: Artemis is suffering from Atlantis Complex, a psychosis common among guilt-ridden fairies and most likely triggered in Artemis by his dabbling with fairy magic. Symptoms include obsessive-compulsive behavior, paranoia, multiple personality disorder and, in extreme cases, embarrassing professions of love to a certain feisty LEPrecon fairy.

Unfortunately, Atlantis Complex has struck at the worst possible time. A deadly foe is intent on destroying the actual city of Atlantis. Can Artemis escape the confines of his mind-and the grips of a giant squid-in time to save the underwater metropolis and its fairy inhabitants?