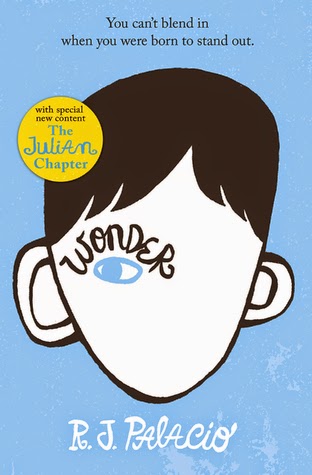 This week, please welcome Mallory! Mallory is the daughter of one of my bookclub members, Gretchen. All of Gretchen's kids love to read, and have even joined our monthly bookclub and offered a perspective from the younger generation.

My name is Mallory, I'm 12 and I love vanilla ice cream.

I read Wonder, because my librarian recommended it.

In one word, I would describe Wonder as inspirational.

My favorite part of the story was when it was Summer's point of view when she says she first sat with August because she felt sorry for him, but then later she started sitting with him because they had actually become friends.

If I had a similar problem, I would try to have my personality make up for my face, and I wouldn't be mean because then people would think I was a mean person with an ugly face. I'd also try to make the best I could of the situation.

I would say to my best friend, "Hey, you should check out this book I'm reading. It's really good!"

The book's cover was interesting how it didn't show the whole face and features, so it could make you imagine what August's face would look like.

Yes, I would like to read another book about these characters, because the author writes really well, and I really like how he wrote from the different perspectives so you could get a taste of how each character was taking in the situation.

Out of My Mind reminds me of this book because everybody looks at the main character in this book the way the characters in Wonder look at August, and nobody gets what she's thinking.

If I could ask the author a question, I would ask, "What happens to Julien and August - do they ever see eye to eye?"

*** Thank you, Mallory! Awesome perspective on an amazing book! ***


About Wonder by R.J. Palacio:


August Pullman was born with a facial difference that, up until now, has prevented him from going to a mainstream school. Starting 5th grade at Beecher Prep, he wants nothing more than to be treated as an ordinary kid—but his new classmates can’t get past Auggie’s extraordinary face. WONDER, now a #1 New York Times bestseller and included on the Texas Bluebonnet Award master list, begins from Auggie’s point of view, but soon switches to include his classmates, his sister, her boyfriend, and others. These perspectives converge in a portrait of one community’s struggle with empathy, compassion, and acceptance.

Email ThisBlogThis!Share to TwitterShare to FacebookShare to Pinterest
Labels: Kidliterati_Ten