The Secrets of Kidlit: Author Spotlight on Elizabeth Cody Kimmel

The spotlight series brings to light authors’ approaches to writing for young readers and the secrets to their success. In this edition, Elizabeth Cody Kimmel will tell us her secrets to writing a series, researching places, and creating supernatural worlds. Kimmel is the author of many books for children, including the popular Lily B. and Suddenly Supernatural series, several historically based works, and adaptations of the animated films ParaNorman and The Boxtrolls.

Welcome, Beth! It’s a treat to speak with such a prolific author about the craft of writing for young readers.

Thank you so much for asking me!

You’ve written books based in either realistic or supernatural worlds. What are the differences and advantages with writing realism and fantasy?

With the genre of the supernatural and its willing suspension of disbelief, there is more latitude for a broad scope in plot, such as going back and forth in time to unravel a mystery. And writing a good old-fashioned ghost story is fun, and when a book is fun to write, that’s probably going to come through to the reader. Writing realistic fiction can be more challenging to do without it getting stale. I've found more and more I need to wait until I have a really unique angle or setting, so that the realistic characters are in some way out of their element.

Some of your books have a geographical setting in common, such as the American West and the polar regions. What was your inspiration to write about these places? 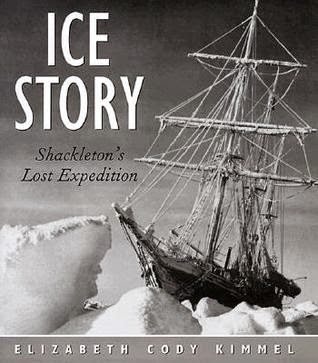 I have been enthralled with cold, remote, and dangerous places for as long as I can remember. I must have hundreds of books on my shelves by explorers, mountaineers, naturalists, and adventure-seekers describing their endeavors and expeditions, so having the opportunity to write about an explorer like Ernest Shackleton, or the sled dogs of Nome, is a great pleasure for me. In writing historical fiction about the American West, such as the Buffalo Bill series,

I was taking on an area of the country and a time period that was much less familiar to me. Although, I didn't need to go to Antarctica to write about Shackleton (much as I would have enjoyed it), I did need to go out west to write about Bill. It was imperative. So I followed his family's factual covered wagon journey from Iowa through Missouri and ultimately Kansas. I went from state to state visiting historical societies, any museums or homesteads associated with the family, and reading period non-fiction. The connection to Bill's story was a personal one—my father is a descendant of his—and I was dedicated to getting his story right.

You’ve also had success with several series. What are the challenges to writing a series versus a stand-alone novel?

I don't find writing a series to be especially challenging or significantly different than a single novel, since any book in a series should also be accessible to a reader, who has perhaps grabbed book 3 without having read the others. If you are setting out to write a series or are simply hoping for a sequel, the trick is to keep the door open for further adventures, and to keep the passage of time contained. If the first book takes the protagonist all the way through the 7th grade, that doesn't leave much development room for three more books. With a stand-alone novel, I do always try to leave an opening as well, in the event a publisher decides down the line that they would like a sequel.

What is your secret to writing for middle-grade readers?

The rule of thumb is that readers usually want a character slightly older than they are, hence many of mine are 12 or 13. I think the secret to writing for that age group is to create strong characters with issues or challenges that the reader can identify with and to do so without being didactic or sounding artificial. Then you must also stay within the confines of that genre in terms of subject matter, word choice, and length. You must, in other words, learn to write within the limitations in such a way that it the limitations themselves are not apparent. The first and most crucial way to do it is through the strength and magnetism of your characters.

As a sneak preview, can you share with us any secrets about upcoming projects?

One of them will be an installment in a very recognizable series. Beyond that, I am developing a mystery involving an ancient manuscript and a portal to another world, and also an adventure that will take place out west, in wolf country.

Thanks for such an interesting interview, Beth. We’ll keep an eye out for your upcoming books. All three sound very intriguing!