We've got an amazing cover reveal for you all today! We're absolutely thrilled to be revealing the cover of RULES FOR STEALING STARS by Corey Ann Haydu. Her book hits the shelves on September 29, 2015 from Katherine Tegen Books and we've got a super-spectacular signed ARC giveaway that one lucky winner will win.

But we'll get to that in a second. First, let's let Corey tell you all about her book:


Silly is used to feeling left out. Her three older sisters think she’s too little for most things—especially when it comes to dealing with their mother’s unpredictable moods and outbursts. But for Silly, that’s normal. She hardly remembers a time when Mom wasn’t drinking.

This summer, Silly is more alone than ever, and it feels like everyone around her is keeping secrets. Mom is sick all the time, Dad acts like everything’s fine when clearly it isn’t, and Silly’s sisters keep whispering and sneaking away to their rooms together, returning with signs that something mysterious is afoot, and giggling about jokes that Silly doesn’t understand.

When Silly is brought into her sisters’ world, the truth is more exciting than she ever imagined. The sisters have discovered a magical place that gives them what they truly need: an escape from the complications of their home life. But there are dark truths there, too. Silly hopes the magic will be the secret to saving their family, but she’s soon forced to wonder if it just might tear them apart.

Now that sounds like an amazing story. And speaking of amazing, I think it's time to reveal the cover for RULES FOR STEALING STARS! 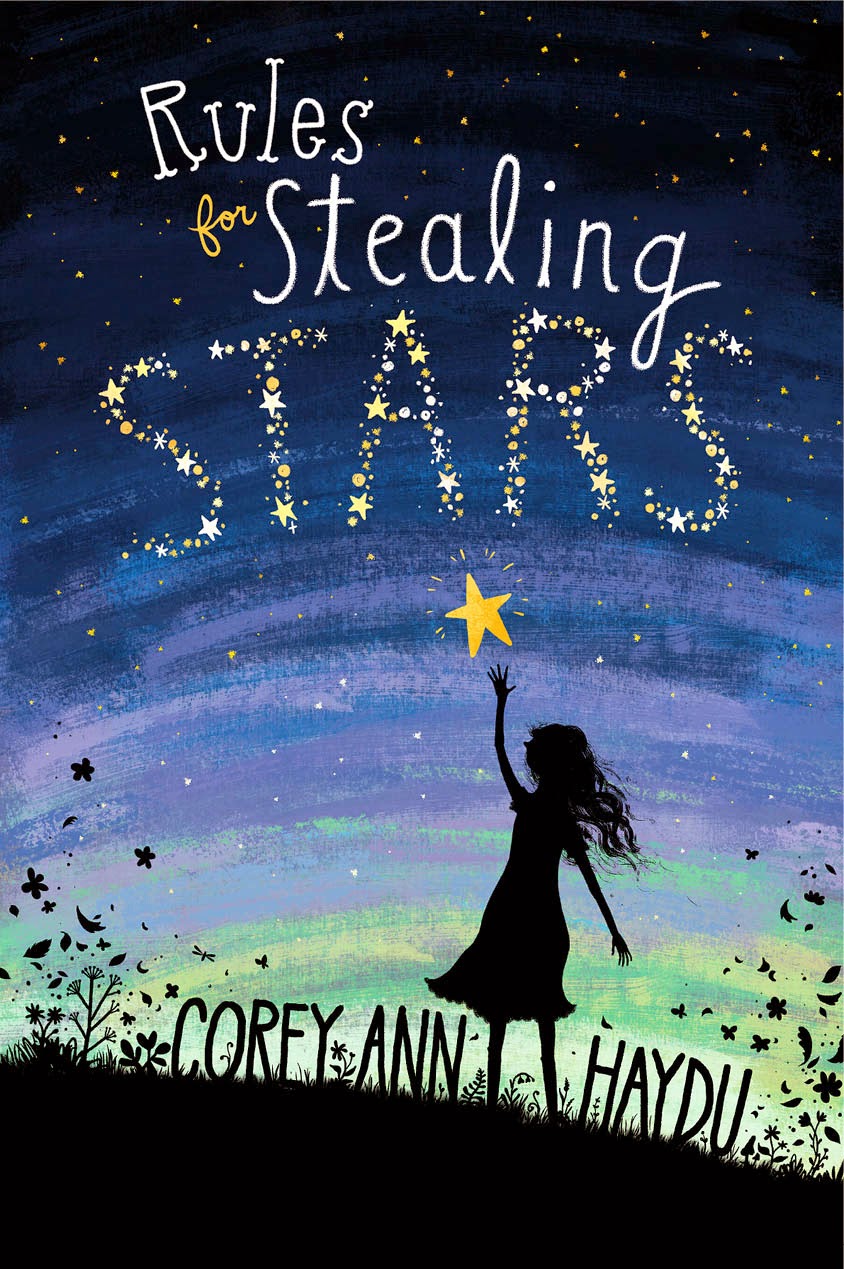 
Gorgeous! The title caught our attention from the very beginning. But now, with all of those blues, the way Silly is framed so perfectly between two swirling clouds of leaves, and that last word of the title spelled out in a trail of sparkling stars, we love it even more. It seems like we're not the only ones who are in love with this cover. Hear what Corey has to say about it:

I’m thrilled to reveal the cover for my debut middle grade novel, RULES FOR STEALING STARS. After publishing novels for teens for the last few years, I’m so excited to reach a younger audience. I started playing with this idea in graduate school, responding to a writing prompt and experimenting for the first time with a middle grade voice. I had no idea it would someday turn into a book. Silly is my favorite character that I’ve ever written, so I was super nervous about what the cover would look like. I think the super talented illustrator, Julie McLaughlin, really captured the feeling of the book, and the design team over at Katherine Tegen Books gave me an unbelievably beautiful cover again. I especially love the placement of the name and the gorgeous colors.

So excited to share the cover and the official jacket copy for RULES FOR STEALING STARS!


Be sure to enter the Rafflecopter below for a chance to win a signed ARC of RULES FOR STEALING STARS!

Corey Ann Haydu is the author of  OCD LOVE STORY, LIFE BY COMMITTEE, MAKING PRETTY and her upcoming middle grade debut, RULES FOR STEALING STARS. A graduate of NYU’s Tisch School of the Arts and The New School’s Writing for Children MFA program, Corey has been working in children’s publishing since 2009.
In 2013, Corey was chosen as one of Publisher Weekly’s Flying Starts. Her books have been Junior Library Guild Selections, Indie Next Selections, and BCCB Blue Ribbon Selections.
Corey lives in Brooklyn with her dog, her boyfriend, and a wide selection of cheese.

Thank you, Corey, for sharing RULES FOR STEALING STARS with us today!