Hop Aboard for ... THE HEIST OF THE CENTURY!

What is it about trains that captures the imagination? Stepping into the passenger car as the horn blasts its final warning. The sea of people from all colors and backgrounds, confined together for a prolonged period. The tremendous range of sights as the countryside whizzes by. 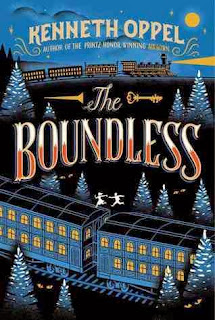 An entire book set on a single train seems like it might get boring, but that's not the case when the train is several miles long. The Boundless is a cross-section of humanity, ranging from the first-class snootfest cars near the engine, all the way to the dingy colonist cars by the caboose.

When our young hero, Will, steps off of first-class to explore, an attack forces him to flee and hide. As the Boundless sounds its horn, Will barely chases down the caboose and clings on for dear life. The only things standing in his way back to his father are miles of train cars ... and a ravenous beast, a cabal of brakemen trying to kill him, an evil swamp hag with psychic powers, and a carnival ringmaster attempting to pull off the world's most dangerous robbery.

No problem. If you want a thrill-a-minute read, that is. 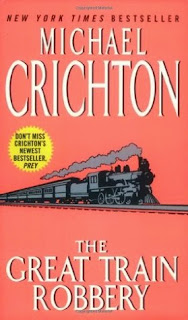 Don't fret, adults pooh-poohing middle-grade literature! THE BOUNDLESS is an engrossing read so I wouldn't skip it, but THE GREAT TRAIN ROBBERY has the same feel to it -- with an adult bent. One part Ocean's Eleven, one part James Bond, and one part Charles Dickens, Crichton spins a tale that must be finished once you start.

Four separate keys that must be stolen and copied? Check. A catlike agility required to move through, around, and over a speeding train? Check. Bait and switch scams? In spades. And at end, a mammoth payday inside a supposedly impenetrable safe.

Supposedly, being the key word. It's the theft of the century, and it cannot be missed.