This year BookCon, an extension of BEA, was held at Javits Center in New York on May 30-31 and invited the book-loving public for a whole lot of book awesome. I was especially excited to see a ton of content targeted at children this year. So I suppose it’s no surprise that the convention floor was jam-packed with kids (the $5 kid’s ticket price probably didn’t hurt either)

Conventions, like BookCon, give young readers the opportunity to immerse themselves in the world of stories in a way they can’t possibly do through their local libraries, schools, or bookstores. It allows children to experience such a unique connection to the world of publishing.

One of my favorite panels of the day was titled: Wands Not Required! and featured MG and YA authors David Baldacci, Maggie Stiefvater, Jackson Pearce, Kevin Sands, and David Levithan who talked about magic and fantasy in MG and YA. Maggie and Jackson stole the show when they talked about co-writing PIP BARTLETT’S MAGICAL CREATURES, especially when they bantered about how they came to invent some of the creatures in their story (playing with clay?). And I found David Baldacci’s discussion on transitioning from being a bestselling adult author to writing for children particularly interesting.

Unfortunately, I missed John Green and the Paper Towns film panel (lines were crazy long!), but I did catch an interesting panel on graphic novels featuring bestselling author/illustrators. Jeff Smith, Raina Telgemeier, and Jenni Holm. I was also lucky enough to score autographed copies of Holm’s the FOURTEENTH GOLDFISH and BABY MOUSE.

But of course, the highlight of the conference was books. Lots and lots of books. Most of the booths were giving away free ARCS and/or signed copies of fan favorites. So there was a lot of this going on. 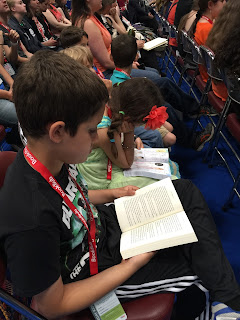 And here is the stash of ARCS I came home with. 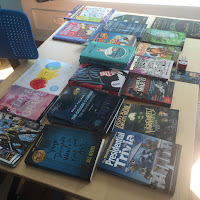 And because I did so well, I’d love to share with Kidliterati readers. I’ll be giving away a collection of ARCS shown in the picture above to one lucky winner. Enter by using the Rafflecopter below.

All in all, a fun day was had at BookCon 2015. Next year’s BookCon will be held in Chicago (along with BEA)*, and this New Yorker is pretty bummed about that. But if you live in the Chicago area, get ready! I strongly recommend it for parents and children.

*There’s an unconfirmed rumor** that ReedPop, the organizer of BookCon, is considering hosting the event next year in New York in addition to Chicago. Fingers crossed!