The Kidliterati wishes a very happy book birthday
to our very own Gail Nall
and her YA debut EXIT STAGE LEFT!

Gail has written a warm and heartfelt story with EXIT STAGE LEFT. We are so excited for readers to meet the main character Casey Fitzgerald. Since Casey's story involves shattered dreams and her high school's production of The Sound of Music, we thought it would be fun to ask a few of Gail's friends to share their own theater experiences.

The stories did not disappoint.

Jen Malone: In seventh grade, I was on the makeup crew (hilariously poor assigning, if you know me at all. My idea of elegance back then was powder blue eyeshadow and hairsprayed to heaven bangs). The play was Go Ask Alice and researching how to make the lead look like she was having a hallucination about being covered in crawling bugs was exactly the thing that scared me away from trying any drugs ever.

Brian Sargent: I was the dog in the tale of Pyramus & Thisbe from A Midsummer Night's Dream. The role had no lines and wasn't even supposed to be played by a person, but the performers had misplaced the stuffed dog they'd been using so they quickly threw me into a period costume and painted a spot over my eye. I was on stage maybe three minutes and, by the next performance, they'd bought a new stuffed dog.

Ronni Arno: The highlight of my theatrical career was the summer between fifth and sixth grades when I was Dorothy in the Wizard of Oz. Sadly, it was all downhill from there.

Ella Schwartz: In tenth grade, I was cast as the prostitute in the show Working. The monologue was so bad, we had to rewrite it for a high school audience. Even still, my very traditional Jewish mother was unamused.

Ki-Wing Merlin: I was either a celery or bok choy in first grade. It was a wordless play about farmers, farmers' wives, and vegetables.

Karen Hallam: I was twelve years old and didn't have my lines memorized until two days before the play because I was having too much fun decorating the set. I was ordered to sit in the green room. The night of the play, all were on stage...and silence. No one spoke. But because I'd memorized everyone's lines in my imprisonment, I saved the play!

Jo Marie Bankston: I got roped into a play at church and was so mortified that when it came time for my big line, one in which I was supposed to be crying, I nailed it. Those tears were real.

and Gail Nall: Of course I have a story. :) Freshman year of high school, I was cast as the somewhat foul-mouthed poker playing friend in The Odd Couple (The Female Version). (Can you tell I went to an all-girls' high school?) Said high school was also Catholic, so several of my lines were rewritten once the principal heard them. Yet my character was still allowed to smoke onstage. Go figure. Also, something went wrong with the lights during one performance, and my tiny, under-five-feet tall friend, who was the stage manager, had to physically hold up an enormous power switch for two hours straight. It was an eventful production.

The theater is tough. We feel your pain, Casey. We really do. 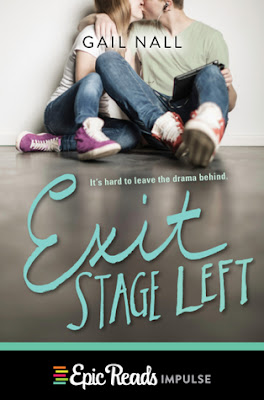 Casey Fitzgerald has always been an actress. She’s known it was her destiny ever since she snagged the role of “apple” in her kindergarten’s production of The Food Pyramid. But when she doesn’t get the lead in her performing arts high school’s production of The Sound of Music, she begins to question everything. Not getting the lead means no recommendations, and no recommendations means she can kiss good bye any chance of getting a scholarship to the prestigious New York College of Performing Arts.

After some soul searching and some wise words from her friend Harrison, Casey decides to totally reinvent herself. She’s already ditched her on-again off-again boyfriend Trevor and is interested in the new boy at school, so why not start fresh with everything? But every new destiny she tries doesn’t seem quite right. And when her best friend, Amanda, who did get the lead, starts hanging out with Trevor, Casey’s not sure if she’ll ever be able to leave the drama behind.

Email ThisBlogThis!Share to TwitterShare to FacebookShare to Pinterest
Labels: Gail Nall, YA