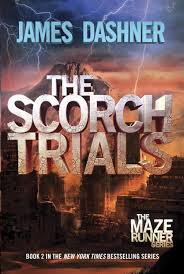 Tell us a little about yourself: what is your first name, how old are you, and what is your favorite flavor of ice cream?
My name is Grant, I am 11 years old, and I like chocolate ice cream with Oreos.

What book did you read and why did you choose it?
I read The Scorch Trials because it is the sequel to The Maze Runner which is also a great book. In fact, I read the whole series.

What was your favorite part of this story?
I liked that the characters were out of the Maze but were still in danger. The world outside the Maze is much more complicated than I thought.

If you had a problem similar to the main character's problem, what would you do?
Thomas and the Gladers have been captured. I think I would have tried to do what the characters did in this book -- protect my friends and try to survive.

What would you say to your best friend to convince them to read this book?
My friends and I recommend books to each other all the time. I'd just tell them that it's really good.

What do you think about the book's cover?
I think the cover is really cool. I like that the letters come out of the page and are cracked like rock. The background looks just like I imagine the Scorch to be.

Would you want to read another book about these characters? Why or why not?
I already did! I read the whole series and the prequel over this summer. As soon as I finished one book, I grabbed the next.

Can you name another book that reminds you of this one?
This book reminds me a little bit of The Hunger Games series. But in The Maze Runner series, Thomas and the Gladers have been kidnapped and brainwashed. They don't know why they are facing the challenges they are facing. The characters never know what challenge is coming up next. The past is a mystery. Thomas and the Gladers have to figure out the past at the same time as they figure out the present.

If you could ask the author one question about this book, what would it be?
Did you ever imagine The Maze Runner series would be made into movies?

James Dashner answered a question very similar to this one in this interview with The Guardian:

"I absolutely considered it that way from the very beginning. Movies are my first love. And that's how I write -- I envision the story cinematically, picture it in my head, and then do my best to tanslate that to the written word. I wasn't arrogant enough to think it would happen this way, but I certainly hoped it. Always."

Thank you to Grant for sharing The Scorch Trials with The Kidliterati!

The Scorch Trials by James Dashner

Solving the Maze was supposed to be the end.

Thomas was sure that escape from the Maze would mean freedom for him and the Gladers. But WICKED isn’t done yet. Phase Two has just begun. The Scorch.

There are no rules. There is no help. You either make it or you die.

The Gladers have two weeks to cross through the Scorch—the most burned-out section of the world. And WICKED has made sure to adjust the variables and stack the odds against them.

Friendships will be tested. Loyalties will be broken. All bets are off.

There are others now. Their survival depends on the Gladers’ destruction—and they’re determined to survive.

Also, look for The Scorch Trials in movie theaters on September 18th!

Email ThisBlogThis!Share to TwitterShare to FacebookShare to Pinterest
Labels: Jean Giardina, Kidliterati_Ten, YA