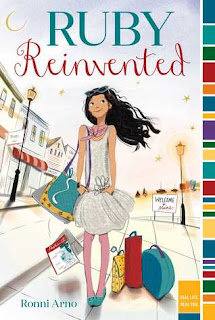 Tell us a little about yourself: what is your first name, how old are you, and what is your favorite flavor of ice cream?
My name is Caroline, I am 9 years old, and I like mint chocolate chip that’s melted and swirled around until it’s like soft ice cream.

What book did you read and why did you choose it?
I read Ruby Reinvented and I chose it because I think the girl on the cover looks really friendly.

Can you describe this book in one word?
Suspenseful!

What was your favorite part of this story?
The suspense is my favorite since Ruby lies about her parents being dead because she doesn’t want her new friends to know they’re really huge celebrities, but then she almost gets caught so many times and I kept thinking, “This is it- she’s busted!”

If you had a problem similar to the main character's problem, what would you do?
I would probably do the same thing Ruby does, but I wouldn’t have $300 to buy all the magazines with my parents’ pictures in them from the store so none of my friends could see them.

What would you say to your best friend to convince them to read this book?
I already told them they should read it because it’s really good and exciting!

What do you think about the book's cover?
I think the cover is so pretty and I like all the different suitcases Ruby has. If I was as rich as her, I’d have that many too.

Would you want to read another book about these characters? Why or why not?
Yes, because I really liked Ruby and I would want to know more about her. I would want a book about her bringing her friends from school to live in her celebrity world and do a fashion show with her.

Can you name another book that reminds you of this one?
Maybe Breaking the Ice because Kaitlin has to be in a big competition and it was kind of like when Ruby had to do her fashion show.

If you could ask the author one question about this book, what would it be?
How did you get the idea to write this book?

Luckily, we know the author around these parts, so we reached out and here is her answer:

I wondered how a 12-year-old would handle being the daughter of celebrities. Would she be proud? Would she feel inadequate? I liked the idea of these very opposite feelings, and I thought it would be interesting to explore them. Then I thought it would be fun to combine two very different locations and lifestyles; Hollywood and small-town Maine, because they, too, are such opposites. Since opposing views makes for lots of tension and excitement, I figured I'd have lots of material, and RUBY was born!

Thanks for sharing with us, Caroline!

When Ruby flees Hollywood to escape the fame of her parents, she tells a lie that could ruin the life she loves at her new boarding school in this M!X novel about courage, families, and finding your own spotlight.Ruby Miller has it made. As the only child of model-turned-TV-host Celestine Cruz and pro-baseball star Zack Miller, she has everything a twelve-year-old girl could want. Well, except for real friends.After a disastrous birthday party where she discovers her supposed BFFs are only friends with her because her parents are uber-famous, she finds a place as far from fake and phony Hollywood as she can get: a boarding school in Camden, Maine. In her desperation to distance herself from her star-studded parents and the paparazzi who trail them, Ruby tells her new friends that she’s an orphan. She feels awful about lying, but once she starts, it’s hard to come clean. Plus, now that nobody’s comparing her to her perfect parents, Ruby can finally let her own talents as a dress designer take center stage.When Ruby finds herself connecting with a cute boy who really did lose his parents, she’s torn between who she is and who she’s pretending to be. And with Parents’ Weekend approaching, she must find a way to keep her secret—without losing her new best friend, the trust of her first crush, and the chance to shine as the designer of her very own fashion show.