I love me some Sam Spade and Mike Hammer. The lingo of the P.I. is so hypnotic, the opening narration of a dame sweeping into the smoke-filled office, slapping down a fat wad of cash as she demands that her husband be followed, that lousy two-timing no-goodnik.

Okay, that's pretty outdated, but talk about "voice"! You get drawn right into the sights, smells, and sounds of the action, listening the to P.I. process all the details.

Now, put a kid into that role, and that's a recipe for dynamite. Here are two books featuring an incredibly memorable kid P.I: 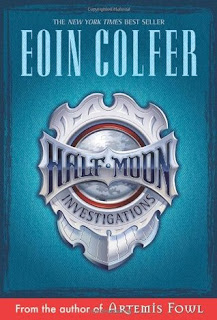 One of my favorite humorous middle-grade books of all time. Fletcher Moon, nicknamed "Half-Moon" due to his height, runs a one-man detective agency. He's a hard-core, old-school tec that will solve your problem, whatever it is ... at the right price.

The book starts with that same Sam Spade rhythm -- hearing it come out of a kid's head had me in stitches. And then when he describes the three types of playground fights, I was on the ground laughing. My favorite is the "Hold Me Back," where two kids yell "hold me back!" (so their friends hold them back, and thus they don't have to fight). Although, the "Windmill" is pretty funny too, two kids wildly circling their arms as they close the gap ...

Along with an engaging mystery where Fletcher has to team up with one of his enemies, the HALF-MOON INVESTIGATIONS is a winner. 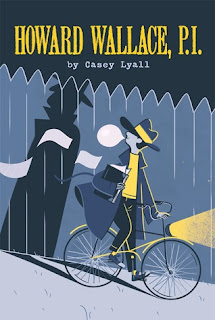 I can't remember the last time I laughed so hard at opening pages. This is Howard narrating as his mom walks into his room:

"She didn't knock, just barged right through the door like she owned the place. She did own it, but that was beside the point. I told her to scram; a man's room is his castle.

"Some mornings I should just keep my mouth shut."

And later we find out that the trenchcoat he wears to make himself look like a P.I. ... is really an old brown bathrobe. There are so many hilarious moments like that. Kept me turning the pages.


Well, that's all for me, toots. Whoops! I mean, good readers.