K10: HARRY POTTER AND THE CURSED CHILD – PARTS ONE AND TWO 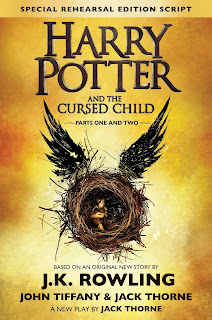 Tell us a little about yourself: what is your first name, how old are you, and what is your favorite flavor of ice cream?
My name is Bridget. I'm twelve years old and I love strawberry ice cream. If I went to Hogwarts School of Witchcraft and Wizardry, I'd be a Slytherin.
What book did you read and why did you choose it?
I read HARRY POTTER AND THE CURSED CHILD – PARTS ONE AND TWO by J.K. Rowling, John Tiffany, and Jack Thorne because the other Harry Potter books are my most favorite books ever and this book is a continuation of where they left off. It looked very good!

Can you describe this book in one word?
What's a good word for action-packed and very fast paced? I'll say adventurous!
What was your favorite part of this story?
Okay, I will try to say this with no spoilers (or as J.K. Rowling said, "Potter fans have always had each other's backs. Today I'm asking you to #KeepTheSecrets of #CursedChild). To avoid any information about the plot, please skip down to the next question. My favorite part would have to be either when Albus and Scorpius get a hold of the Time-Turner or when they jump off the train and the trolley lady grows destruction arms and tries to grab them.
If you had a problem similar to the main character's problem, what would you do?
Albus thinks he's an outsider trying to live up to his dad – who saved the world. It's hard to imagine having the same problem, but if I did, I would probably try to make more friends. If Albus had more friends, he would have more back up to help him solve his problem and stay out of danger. If I were Albus, I would act similarly, but not as extravagantly.

What would you say to your best friend to convince them to read this book?
All of my friends are Harry Potter fans and this book is a must read for any Harry Potter fan! The plot is complicated and it has so many twists and turns. There is never a dull moment! I would have read the book in one night – if my parents hadn't made me go to sleep.
What do you think about the book's cover?
I like the symbolism on the cover. It's Albus Potter in a nest with wings. He's alone and trying to break away from living up to his dad. I can't say what I think the wings mean without spoiling the book.
Would you want to read another book about these characters? Why or why not?
I would absolutely love to read more! It's another generation of Harry, Hermione, and Ron. Albus Potter is kind of like Harry and Scorpius Malfoy is kind of like Ron. They have a similar friendship and I want to know where they will go on their adventures together. I would love to see what happens to these two friends at Hogwarts.
Can you name another book that reminds you of this one?
All seven of the other Harry Potter books because this book is a continuation of the characters and the original story. Also, MAGYK by Angie Sage. Both stories have wizards and witches running from an evil group. They both have thrilling plots.
If you could ask the author one question about this book, what would it be?
I would like to ask J.K. Rowling how she decided on the plot and why she wrote the book as a play and not as a novel?

J.K. Rowling hasn't answered these questions in interviews, but we hope she will in the future.

Additional recommendations from Bridget:
Of course, I would recommend any story related to Harry Potter! I also enjoy THE LAND OF STORIES series, HALF UPON A TIME, and THE CHRONICLES OF NARNIA.

Based on an original new story by J.K. Rowling, Jack Thorne and John Tiffany, a new play by Jack Thorne, Harry Potter and the Cursed Child is the eighth story in the Harry Potter series and the first official Harry Potter story to be presented on stage. The play will receive its world premiere in London’s West End on July 30, 2016.

It was always difficult being Harry Potter and it isn’t much easier now that he is an overworked employee of the Ministry of Magic, a husband and father of three school-age children.

While Harry grapples with a past that refuses to stay where it belongs, his youngest son Albus must struggle with the weight of a family legacy he never wanted. As past and present fuse ominously, both father and son learn the uncomfortable truth: sometimes, darkness comes from unexpected places.