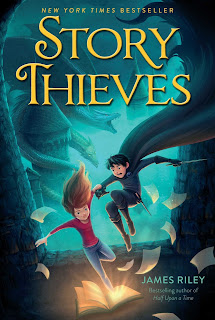 Tell us a little about yourself: what is your first name, how old are you, and what is your favorite flavor of ice cream?
Sierra. 10-years-old. Birthday cake flavor.

What book did you read and why did you choose it?
Story Thieves by James Riley. I chose it because I read the back and I was instantly intrigued.

Can you describe this book in one word?
[Sighs] Amazing.

What was your favorite part of this story?
[Major SPOILER ALERT] One of my favorite parts was when Kiel gets eaten by a dragon (he doesn't die though).

If you had a problem similar to the main character's problem, what would you do?
So, one of the main characters, Owen, gets trapped in a book. If this happened to me I would play along with the story until my friends came to rescue me.

What would you say to your best friend to convince them to read this book?
This book is one of my favorite books ever! It's great if you don't like a book that only stays with one character because it switches off.

What do you think about the book's cover?
It's one of the best covers I've ever seen.

Would you want to read a similar book? Why or why not?
Yes, but [laughs] I'm pretty sure nothing is better than Story Thieves.

Can you name another book that reminds you of this one?
Nope. There's nothing similar. It's unique.

If you could ask the author one question about this book, what would it be?
Why aren't there any illustrations inside the book?

Keeping this sparkling recommendation in mind, be sure to check out STORY THIEVES by James Riley!


Life is boring when you live in the real world, instead of starring in your own book series. Owen knows that better than anyone, what with the real world’s homework and chores.

But everything changes the day Owen sees the impossible happen—his classmate Bethany climb out of a book in the library. It turns out Bethany’s half-fictional and has been searching every book she can find for her missing father, a fictional character.

Bethany can’t let anyone else learn her secret, so Owen makes her a deal: All she has to do is take him into a book in Owen’s favorite Kiel Gnomenfoot series, and he’ll never say a word. Besides, visiting the book might help Bethany find her father…

…Or it might just destroy the Kiel Gnomenfoot series, reveal Bethany’s secret to the entire world, and force Owen to live out Kiel Gnomenfoot’s final (very final) adventure.