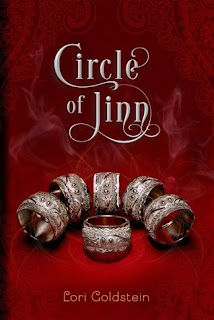 I read Circle of Jinn and I picked it up because I had read the first book, Becoming Jinn, and I wanted to see how the series ended.


Can you describe this book in one word?

Action-packed. Do hyphenated words count as one?

I liked all the descriptions of the Jinn world. The first book was set in our regular world, so it was cool to see where the Afrit lived.

I would probably find a way to remove my powers, so the Afrit couldn't track me and I wouldn't have to grant wishes.

I already talked my brother into reading this, and to do that I told him it had a lot of action and fighting and a cool setting (and I left out any mention of the kissing parts)!

I think it's pretty cool--I really like the color.

Probably not, because the story wrapped up in this one, so...

How did she come up with the idea for this story?

Lori Goldstein answered this question in an interview with Hypable.

"Becoming Jinn is a modern spin on the traditional tale of wish-granting genies. The genies in my book are Jinn, which are magical beings derived from North African and Middle Eastern lore. As soon as I heard the name Azra, which was during a news report following an earthquake in Turkey, a character popped into my head. I didn’t know she was a Jinn right off the bat, but as I explored what kind of story I could build around her, I was drawn to one that would allow me to add touches from these other cultures."

Thank you to Jack for sharing Circle of Jinn with The Kidliterati!

Circle of Jinn by Lori Goldstein

Being Jinn is Azra’s new reality. As she grants wishes under the watchful eye of the Afrit council, she remains torn between her two worlds—human and Jinn. Soon, secrets spill. Zars are broken. Humans become pawns. And rumors of an uprising become real as the Afrit’s reach extends beyond the underground world of Janna.

Straddling the line becomes impossible. Aware of her unique abilities, Azra must not just face but embrace her destiny. But when the role she must play and those she must protect expand to include a circle of Jinn greater than her own, Azra will be forced to risk everything. A risk that means there’s everything to lose, and at the same time, everything to gain—for herself and her entire Jinn race.

In this dramatic sequel to Becoming Jinn, Azra’s story comes to a heartfelt and thrilling conclusion.

Email ThisBlogThis!Share to TwitterShare to FacebookShare to Pinterest
Labels: Jen Malone, Kidliterati_Ten, YA