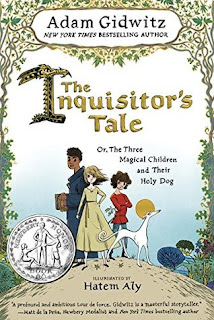 
Tell us a little about yourself: what is your first name, how old are you, and what is your favorite ice cream flavor?
My name is Grant, I just turned 13 years old (I'm a teenager!), and I like chocolate ice cream.

I read The Inquisitor’s Tale and I picked it because I’ve read Adam Gidwitz’s Grimm series and loved those books.


Can you describe this book in one word?

I love how all of the characters backstories were explained in the beginning and then the story tied them all together.

I would probably live in the forest and hide. I’m not as brave as the characters are. I couldn’t do what they had to do.

There are so many magical aspects to this story!

The cover is magical too. The gold lettering really stands out. I also love the illustrations inside the book. They really help to tell the story.

Yes! So much yes!

It is similar to Mr. Gidwitz's Grimm series because it incorporates old stories in a new way. I like how The Inquisitor's Tale includes stories about religious belief.

If you could ask the author one question about this book, what would it be?
Did your inspiration for this book come from history?

Adam Gidwitz answered this question in his author's note and expanded on it in an interview with Publisher's Weekly.
"[T]here was this Indiana Jones aspect to medieval history that hooked me, and since we wound up traveling to Europe every year, eventually I began to wonder if I could get a book out of it. I started trying to organize the stories I had collected about six years ago."

Thank you to Grant for sharing The Inquisitor's Tale with The Kidliterati!

The Inquisitor's Tale by Adam Gidwitz:

1242. On a dark night, travelers from across France cross paths at an inn and begin to tell stories of three children. Their adventures take them on a chase through France: they are taken captive by knights, sit alongside a king, and save the land from a farting dragon. On the run to escape prejudice and persecution and save precious and holy texts from being burned, their quest drives them forward to a final showdown at Mont Saint-Michel, where all will come to question if these children can perform the miracles of saints.

Join William, an oblate on a mission from his monastery; Jacob, a Jewish boy who has fled his burning village; and Jeanne, a peasant girl who hides her prophetic visions. They are accompanied by Jeanne's loyal greyhound, Gwenforte . . . recently brought back from the dead. Told in multiple voices, in a style reminiscent of The Canterbury Tales, our narrator collects their stories and the saga of these three unlikely allies begins to come together.