It's release day for BEST. NIGHT. EVER! There are not one, not even two, but three Kidliterati contributors who authored this fun new middle grade novel -- Ronni Arno, Jen Malone, and Gail Nall, along with authors Dee Romito, Stephanie Faris, Alison Cherry, and Rachele Alpine.

To celebrate, we've created a mini blog hop of sorts! Follow the link at the end of this post to find more fun stuff, and be sure to enter to win one of seven copies of the authors' other books.

Jen Malone . . .
My first dance was in 8th grade and I don’t remember all that much about it, except that took place at Halloween and I went as Madonna, complete with an off-the-shoulder neon sweatshirt, rubber jelly bracelets all the way up my arm and a belt that read Boy Toy (I was far from a boy toy, trust me! I’m pretty sure I formed the words out of aluminum foil and glued them to one of my dad’s old belts). Between the box worth of aluminum foil and the copious amounts of aerosol hairspray on my head, I was basically walking ingredients of a science experiment waiting to go wrong!

Ronni Arno . . .
My first school dance was in 6th grade. I remember having a huge crush on a boy in my class, and I was both excited and horrified at the prospect of dancing with him. That never happened, though, since all the boys stayed on one side of the gym and the girls stayed on the other. I don’t have any memories of anyone actually dancing! I don’t remember what I wore, but I can guarantee it was floofy and flowy and flowery, and my hair was feathered!

Gail Nall . . .
So I went to a teeeeeny tiny Catholic grade school. It was too small for school dances, although sometimes we went to mixers at other Catholic grade schools. My most vivid dance-related memory, though, is from 8th grade. Our class was on a field trip to Washington, DC, and somehow the school convinced the hotel to let us hold our own mixer in one of the conference rooms. (Don’t ask why a group of 28 kids who’ve known each other for eight years needed a mixer.) Anyway, my mom and my BFF’s mom were chaperones on the trip. They came to the mixer and acted pretty normal and unembarrassing for most of it . . . until Kris Kross’ “Jump” came on. Then they danced. A lot. And very energetically. My BFF and I wanted to crawl under the table and never, ever, ever come out again. I still remind my mom of this Very Embarrassing Moment from time to time.

Alison Cherry . . .
I went to such a small school that there were only twelve kids in my grade, and most of us had known each other since kindergarten. The school organized a dance for the whole middle school, but since we basically all saw each other as annoying brothers and sisters, we had ZERO interest in dancing with one another. The teachers kept encouraging us to dance, and we responded by lining up in a row across the dance floor and bending our knees in unison. They finally got us to dance with each other in pairs a couple of times by bribing us with loose change they found in their pockets and purses. I snagged a quarter for doing half a slow dance with a boy who went by Spud. 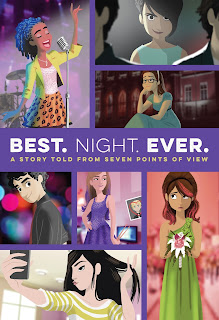 Love Actually meets Adventures in Babysitting in this hilarious novel written by seven authors about seven classmates who are preparing for a crazy night at their middle school dance.

Lynnfield Middle School is prepped and ready for a dance to remember, including an awesome performance from Heart Grenade, the all-girl band who recently won a Battle of the Bands contest. Seven classmates—Carmen, Genevieve, Tess, Ryan, Ellie, Ashlyn, and Jade—intend to make the most of the night…or at least the five of them who are able to attend do. The other two would sacrifice almost anything to be there.


One thing’s for sure—this entire crew is in for one epic night! Gail Nall, Dee Romito, Rachele Alpine, Ronni Arno, Alison Cherry, Stephanie Faris, and Jen Malone have created a charming, hilarious, and relatable novel that’s perfect for anyone who can’t wait to dance the night away.

Enter to win one of the Best. Night. Ever authors' other books! We're giving away seven books -- one written by each of us -- to seven lucky people! (Best. Night. Ever. not included)