Today we are thrilled to host Susan Tan, author of CILLA-LEE JENKINS: FUTURE AUTHOR EXTRAORDINAIRE, published March 28th, 2017 by Roaring Brook Press. Priscilla "Cilla" Lee-Jenkins's story is a novel bursting with love and humor, as told through a bright, irresistible biracial protagonist who will win your heart and make you laugh. Stay tuned for a giveaway below!

Learning to Write While Writing


How do you write a book? It’s one of the most frequent questions I get, and while I always try to answer it honestly, I wonder if I should tell the full truth: that “how do you write your books?” is also my go-to question, whenever I meet other writers. 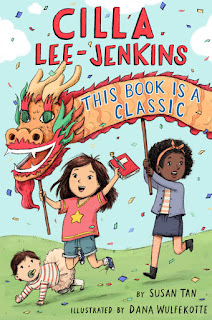 Of course, I’ve written a book before, now two in fact (my second book, Cilla Lee-Jenkins: This Book is A Classic comes out in March 2018). But as I begin the third book in the Cilla series, and as I consider the terrifying-yet-exciting prospect of a totally new project after that, I realize that with each new project, I feel like I’m back at square one, asking the authors around me, “so, how exactly do you write your books?”

Writing is funny work. It’s abstract, it involves hours (or even days) at a time sitting by yourself immersed in your own imaginary world. Because it’s so personal, it’s the biggest privilege (Your own imaginary world! For days! Usually in pajamas!). But I find that writing, for me at least, can be quickly derailed by obstacles, doubts, and procrastination.

When I started writing (with no idea that the story I worked on every night would actually someday be a real book), I imagined that once you were published, there would be some core wisdom about writing that you’d know once finished: a wisdom that provided a stable, concrete answer to how, exactly, you go about turning ideas into published products.

But as my debut year winds to a close, I’ve discovered this isn’t how it works. The more I write, (and the more I ask my fellow authors for their advice) the more I’m learning that the key to writing might simply lie in the sheer number of strategies you learn and create. It’s all about finding new ways to approach/trick/cajole/bribe yourself into the actual physical process of writing.


Tips about Writing I’m Learning as I Write:

I hope to write more, and as I do, I hope this list will expand (I’m realizing a lot of authors I know include chocolate in their writing strategies, and that feels like an excellent idea that I’m missing out on). But I hope too, as I learn more about writing simply through the act of bribing myself into the chair, that the process of generating this list, and finding new ways to approach stories, myself, and the people around me, never ends.

Susan Tan has worked with children's books since the age of 14, when she was a Page in the children's room of the Concord Public Library. She went on to study English at Williams College and earned her PhD at the University of Cambridge in Critical Approaches to Children's Literature. While in graduate school, she began to write a children’s book of her own which became her debut novel, Cilla Lee-Jenkins: Future Author Extraordinaire.

Cilla is based on Susan’s own experiences growing up in a mixed-race family, and deals with the questions, challenges, and many joys that navigating different racial and cultural identities can bring. A second book in the Cilla series titled Cilla Lee-Jenkins: This Book is A Classic is scheduled for release in 2018. Susan was the 2015 Gish Jen Emerging Writers Fellow at the Writers’ Room of Boston and currently teaches at the University of Massachusetts, Boston. You can follow her on Twitter (@susansmtan), or write her a message on the "Contact" page.