Guest Post with Julie Leung, author of THE MICE OF THE ROUND TABLE

Today we are thrilled to host Julie Leung, author of THE MICE OF THE ROUND TABLE, published October 4th, 2016 by HarperCollins, and its sequel, VOYAGE TO AVALON, published October 3rd, 2017. This is the story of young mouse Calib Christopher, who dreams of the day when he will become a Knight of Camelot like his father and grandfather before him. Today, Julie is here to share her secrets for writing kidlit. 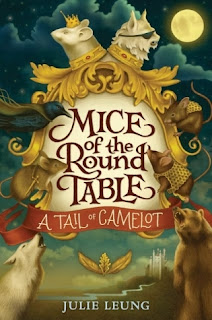 The act of reading fiction necessitates putting yourself in someone else’s shoes. I believe the ability to do this in everyday life is the foundation of empathy. Thus, reading books help make more empathetic people. Studies support it, one of my favorites being the one that links being a Harry Potter fan with being more tolerant.

My middle grade book series, The Mice of the Round Table, are retellings of some of the more popular Arthurian legends through the eyes of a humble mouse and his woodland allies. They were a lot of fun to write, and I hope just as fun to read. I loved spending time in an imaginary playground of talking animals, magical wizards, and fantastical scenes of legendary feats.

However, during my writing process, disturbing and alarming news filtered in from the real world. It became apparent to me that my country, the one my parents found a sanctuary in, was becoming more divisive by the day. I began to wonder what could I do as a writer to encourage a more compassionate person.

Beyond a simple retelling, I wanted to explore some of the complex, universal questions we have to face as a people — How do we negotiate the costs of generational conflict and prejudice? What is the true meaning of heroism? Here are some ways I set out to distill lofty ideas in a children’s book without sounding like an overt parable.

Present Multiple Perspectives to the Same Problem: At the beginning of my series, a core feud exists between the creatures who live in Camelot and those who reside the surrounding woods. Generations of bad blood have simmered as prejudices blossom on both sides. Those who reside in Camelot believe the creatures of the Darkling Woods to be no-good raiders and opportunists.

However, throughout the series, we learn that there is a good reason for the Darklings’ actions. What seems like wanton raiding to Camelot’s eyes are the only means of survival for the Darklings whose homelands are endangered. The natural balance of their environment has been upended by magical forces.

It was important for me to look at the same conflict from different perspectives to demonstrate how often, one’s first assumption about someone is not necessarily the most accurate one.

Give Villainy a Multi-Dimensional Motivation: I’ll admit, sometimes, it’s fun to watch a flamboyant villain just be comically evil, and have their efforts be dramatically refuted by the story’s hero. It’s an arc that makes so many Disney movies and classic fairy tales feel so satisfying. However, my favorite villains always trend toward more complex motivations. Not necessarily sympathetic villains, mind you, but one’s whose motivations may even be justified in a certain light.

When it came to creating my own villains for Mice of the Round Table, I wanted to make sure that it wasn’t just simple greed or maliciousness that powered my evildoers. Rather, I wanted to show how a corrupted worldview can lead to evil actions. (My favorite example of this is Javert from Les Miserables.) It is their harsh viewpoints of the world that allow them to see nothing but the bad in others and act through their own sense of morale. This is a viewpoint that is developed through their own tragic experiences. In this way, empathy is the anti-dote to this kind of villainy.

Essentialize but Don’t Simplify: One of the pitfalls of storytelling can be to let the morale overtake the story. The author becomes too focused on delivering the intended lesson that it becomes too heavy handed or too pat. Kids of a certain age can totally see through that, and it lends an inauthentic air to the whole narrative—like poorly masked medicine.

I think the key to avoiding this pitfall is to make sure that while your main character comes to realize essential truths about kindness, friendship, and et cetera, never simplify the path to that realization. Make sure all characters read as fully fleshed characters and not props in the service of the hero’s journey. Let the main character’s emotional journey unfold realistically, with personal setbacks, warts and all. And above all else, let the reader come to their own conclusions through your breadcrumbs rather than with bold, explicit signage. 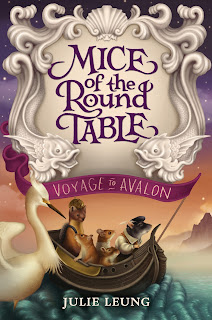 A mysterious curse sparks a dangerous quest in book two of the epic middle grade series ALA Booklist called “a charming blend of Arthurian legend and Brian Jacques’s Redwall series.”

Young mouse Calib Christopher has nearly completed his training to become a squire to the Knights of Camelot when news of a deadly plague reaches the castle. Soon all of Camelot is showing signs of the illness, animals and humans alike. Desperate to find a cure, Calib and his friend Cecily set off on a voyage to find the healing land of Avalon. But even as their journey takes them over land and sea, back at home, Calib’s human friend Galahad discovers that the true enemy may have already found a way inside the castle walls.…

JULIE LEUNG was raised in the sleepy suburbs of Atlanta, Georgia, though it may be more accurate to say she grew up in Oz and came of age in Middle-earth. She works in book publishing as a digital marketer. In her free time, she enjoys furtively sniffing books at used bookstores and winning at obscure board games. Her favorite mode of transportation is the library.