K10: The Problem Child (The Sisters Grimm #3) by Michael Buckley 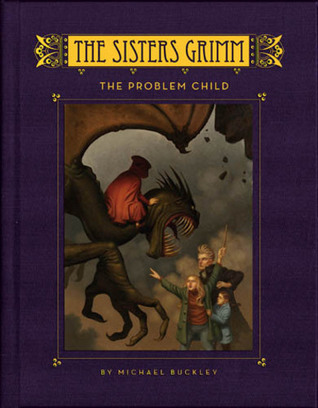 Tell us a little about yourself: what is your first name, how old are you, and what is your favorite flavor of ice cream?
My name is Maddy, I'm 8, and I'm torn between toasted coconut and oatmeal cookie.

[editor's note: Maddy has inspired us at Kidliterati to move beyond conventional ice cream flavors.]
What book did you read and why did you choose it?
Sisters Grimm Book 3: The Problem Child
Can you describe this book in one word?
Enchanting
What was your favorite part of this story?
When we found out who kidnapped the sisters' parents.
If you had a problem similar to the main character's problem, what would you do?
Well, Sabrina has A LOT of problems, but the one I picked for this question is when she has to escape from an asylum without getting killed by the character who kidnapped her parents. I would try to trick him/her and escape.
What would you say to your best friend to convince them to read this book?
If you like fairies and dragons, you're gonna like this book!
What do you think about the book's cover?
I think it's a good representation of the book.
Would you want to read another book about these characters? Why or why not?
I have! I read the whole series of 8 books because I felt like once I started I couldn't stop.
Can you name another book that reminds you of this one?

Harry Potter and the Prisoner of Azkaban.

Where do you get your ideas?

Author, Michael Buckley came up with the idea for the book series after reading an old copy of The Brothers Grimm, where he learned they actually had a sister (who knew?). He soon began imagining the story of Sabrina, Daphne and then came up with the magical setting of Ferryport Landing. But a magical realm needs loads of fairytale characters, so Michael decided to add characters from Hans Christian Andersen, Charles Perrault, and even Shakespeare!

*Thanks so much, Maddy, for sharing this great book with us!*

About The Problem Child (The Sisters Grimm #3):
For Sabrina and Daphne Grimm, the latest in a long line of fairy-tale detectives, there is one mystery they want to solve more than all the others: Who kidnapped their parents more than a year ago? Sabrina enters the hideout of the Scarlet Hand, the sinister group of Everafters who are keeping her parents prisoner. She has a chance to rescue her mom and dad but is foiled by the most famous fairy-tale character in the world. How can a human child defeat a magic one? With the help of her little sister (who might be tougher than Sabrina realizes) and a long-lost relative, Sabrina finds a powerful weapon for fighting her enemies, and discovers that magic has a high price.