Secrets of Kidlit: Interview with Eric Bell, Author of Alan Cole is Not a Coward

Hey there, Kidliteratians! Today we're welcoming middle grade author Eric Bell to the blog. Eric is the author of Alan Cole is Not a Coward, which hit the shelves in 2017. Read on to find out how Eric changed the characters from the first version of this book, his favorite scene in Alan Cole, negative feedback, and thoughts on everything from cats to Kix cereal. 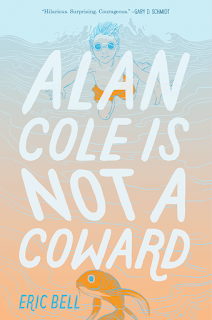 Hi Eric! I think the most fascinating part of Alan Cole is Not a Coward is the characterization. Every single character in this book is so realistic and complex. What's your secret? How do you create such interesting characters?

Eric: Thank you! I’m not sure I have some secret formula to characters. I usually start with something small, like a trait or a name or even a line of dialogue, and then I build from there. Alan, Zack, and Madison were all originally designed to stand out in a kind of id-ego-superego setup, with Zack (who was originally the protagonist) as the ego, Alan (originally much more sarcastic and slacker-ish) as the id, and Madison (basically the same the whole time) as the superego. As the characters developed I mostly moved away from that, but that was the starting point. The more I wrote the characters – not just the main trio, but the supporting cast as well – the more comfortable I got with letting them show me aspects of themselves I hadn’t figured out yet. I guess that’s when you know your characters are developed – when you can let them run loose in your story and see what happens.

I found myself feeling very uncomfortable reading the scenes with Alan's family because they were so raw and real. I actually had to put the book down once or twice. But those ended up being some of my favorite scenes in the book. What is your favorite scene in Alan Cole?

I won’t say what happens in it because it’s a spoiler, but my favorite chapter is chapter 19, which is the start of the final day Alan has to complete the CvC tasks. You’ll have to read the actual book to find out what happens! (Not you, Gail. I know you’ve read it. I mean readers of this post!)

I loved that scene too! Was this book the first manuscript you've written, or do you have a graveyard of lonesome manuscripts on your hard drive? (I fully admit to the latter!)

I wrote two manuscripts before this one. The first actually involved the core cast of Alan Cole but centered around Zack. I thought it was amazing, but it was really really bad. Then I wrote a second, which was also MG but centered around a different cast, and I thought it was amazing, but it was also really really bad. In spite of their dubious (at best) quality, these books were necessary stepping stones for me in my career. I never could have written Alan Cole had I not written these manuscripts first.

Even though it's 2018, there still seems to be some pushback on books that deal with real-life issues for kids. Have you gotten any negative feedback on Alan Cole?

There have been a few reviews that have taken issue with the severity of Alan’s family dynamic and the abuse he takes from his brother and father. I stand by my assertion that children can handle more than adults give them credit for, and that kids are generally good about putting down something they might not be comfortable reading.

Let's talk favorite books! What are your favorites? Are there any authors or books that inspired your writing style?

Speaking of serious family dynamics, one of my all-time favorite books is Okay for Now, by Gary D. Schmidt. That book was a huge influence on Alan Cole in terms of story and voice. And Gary Schmidt wound up blurbing for my book, which was a huge honor.

What's up next for you? What are you working on now?

A sequel, Alan Cole Doesn’t Dance, will be out October 9, 2018. It’s set roughly one mouth after the events of Alan Cole Is Not a Coward. I’m really excited about it!

Now for the most important, soul-searching, world-changing questions:

Coffee or tea? I drink water and orange juice basically exclusively.
Dogs or cats? Cats without a doubt.
Star Wars or Star Trek? Never watched anything Star Trek but I used to be obsessed with Star Wars.
New York or Los Angeles? I’ve never been to LA but NYC is overwhelming, so can I say neither?

Also, some questions to answers you didn’t ask: if I could meet one historical figure, probably Da Vinci; if I could travel to any period in time, two hundred years from now; I listen to music when I write, mostly from video games I’ve never played; I am a grown man and I still eat Kix cereal for dinner; my favorite color in general is blue but favorite color to wear is purple; and if I could be any non-writer job it would probably be some type of copy editor or proofreader. Whew! I think that covers it.

It does! Thank you so much for stopping by, Eric. I'm sure I'm not the only one looking forward to Alan Cole's sequel. 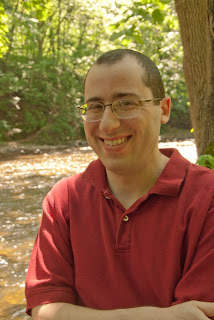 Eric Bell graduated from Indiana University of Pennsylvania with a degree in Psychology and a minor in English. Once the other kids at recess began pretending to go on the adventures he came up with, he never stopped telling stories. His first novel, ALAN COLE IS NOT A COWARD, is out now; a sequel, ALAN COLE DOESN’T DANCE, will come out October 9, 2018.