Today we are thrilled to host Kyle Lukoff, author of A Storytelling of Ravens, a picture book publishing May 1st, 2018 from Groundwood Press, as well as two further picture books. Today, Kyle is here to share his perspective on engaging with young readers. 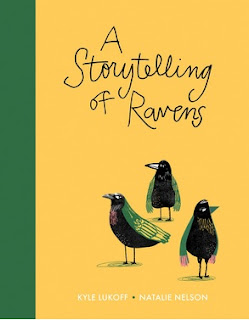 Thanks, Kidliterati, for giving me the chance to talk about my new picture book! I know this site focuses more on middle grade and young adult, but I’ve tried to make this relevant. A STORYTELLING OF RAVENS (illustrated by the incredible Natalie Nelson) has been described as “sophisticated,” “sly,” and “off-beat,” and I wanted to share how—and why—I use the story with a range of audiences, from pre-kindergarten up through third, fourth, and even fifth grade.

Some context: It’s hard to say what this book is “about,” but the elevator pitch is that it’s about collective nouns, and each page is a one or two sentence story, using the collective noun of an animal in a creative way. The text on the first page reads, “The nuisance of cats blamed it on the dog.” The second page says, “The memory of elephants knew the peanut field had to be around here somewhere.” Et cetera. I describe it as a mash-up of Sandra Boynton and Ruth Heller.

The first time I read the book aloud, to actual children, was in a class of preschoolers, three- four- and five-year-olds. And after a few pages, I realized that my little munchkins were really responding to the pictures, but didn’t quite seem to understand the words. Which is understandable, since a lot of the vocabulary is way above their age level. 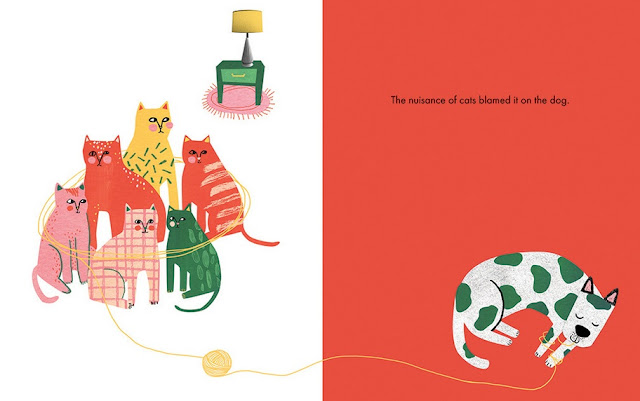 Luckily, I’m also their librarian! The bread and butter of my day job is figuring out, often on the fly, how to get kids of all ages to engage with a wide variety of books. So I slowed down. I started asking questions. “What should the toads do now?” I asked. “What do you think ‘sloth’ means? Are the bears looking for their food, or are they being lazy?” And it worked! They even wrote some reviews afterward. 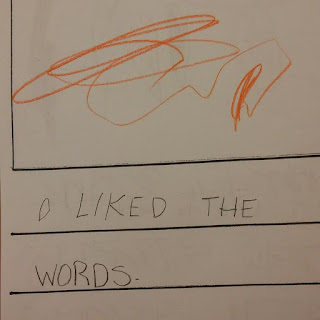 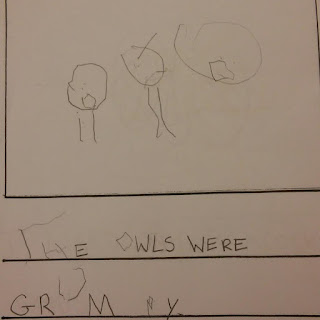 My first class visit outside of my school was to a group of kindergartners, and they were even more engaged. After an initial read-through I asked them to share their favorite pages, so we could to back to them. We looked closely at the illustrations and text, me breaking down some of the vocabulary words, and them sharing their ideas about what was happening on each page (“I think the cat tied up the dogs!” “Maybe one owl didn’t agree with all the others”). We talked about what it feels like to be part of a group, and what it feels like to be on the outside of a group. And, as kids so often do, they pulled out meanings and ideas that I hadn’t considered when I first wrote this text, almost ten years ago.

But what about older kids? I read picture books to third, fourth and fifth graders all the time, but I usually choose meatier ones, with longer text or more overt historical or societal context. But older kids love wordplay, and are able to unpack much more from a brief sentence than the little ones. I hadn’t particularly thought about the complex nature of group dynamics present on almost every page until one fifth-grader pointed out, “It’s like they’re each part of a group, but there’s always one who’s doing something different, and maybe feels a little bad about it,” which is as accurate a description of elementary and middle school social dynamics as I’ve ever heard.

But there’s also a deeper question at play, which underlies the whole story: Why collective nouns? The strange words used to describe groups of animals aren’t exactly crucial players in the fight for social justice or liberation. They’re fun. Interesting. Kind of weird. They probably won’t make the world a better place, while other books have a much more material impact. 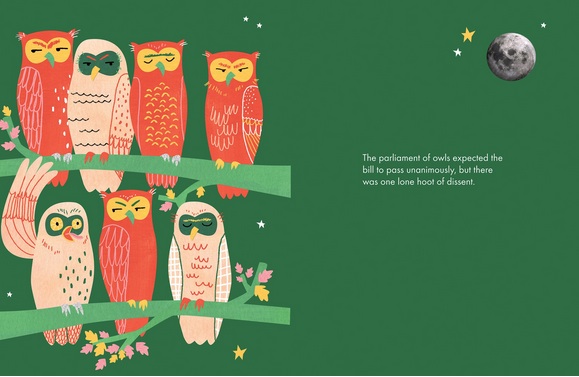 But I also believe in language. I believe in it as more than just a vehicle for information, for translating between that space inside someone’s head and outside someone’s head. If we want the capacity to see the world as a complicated place, where every issue has nuance, where honesty and truth are not always the same, we need words that are up to the task. I want children to know that they might see a pride of lions, a memory of elephants, and a tower of giraffes (if such wonders survive what seems to be an inevitable climate collapse), and also to know that they could feel sad, but also bewildered or bereft. Happy but also sanguine or exhilarated. Angry, maybe impotently, maybe righteously. A world of language for the worlds that are inside them, and for the worlds that are outside them. A STORYTELLING OF RAVENS, and all the other stories too. 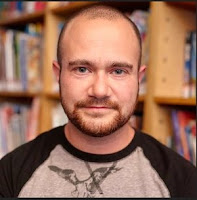 Kyle Lukoff's debut picture book, A Storytelling of Ravens, will be out in the world on May 1st, 2018 from Groundwood Press. Find it at your favorite local bookstore, or some other part of the Internet. Kyle's next two picture books, Aidan and the Baby (Lee & Low) and Explosion At The Poem Factory (Groundwood), will be out in 2019. When Kyle isn't writing picture books (or reading middle-grade, YA, and grownup books), he works as an elementary school librarian in New York City.