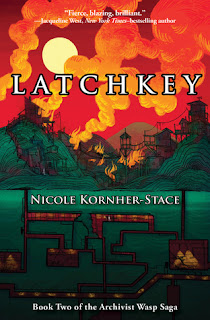 Latchkey by Nicole Kornher-Stace
My rating: 5 of 5 stars

Fans of the young adult novel ARCHIVIST WASP will be thrilled to learn that a new Wasp story publishes on July 10th, 2018. We were lucky to secure a preview of the sequel, and are happy to report that it's just as intense, fascinating, and strange as the first installment from Nicole Kornher-Stace.

LATCHKEY begins three years after the conclusion of ARCHIVIST WASP, at a time when Wasp--now known as Isabel--and the other residents of Sweetwater have finally found some kind of precarious peace among the devastation of the Waste. Unfortunately for Isabel but fortunately for readers, that peace doesn't last long, as raiders are soon spotted on the horizon following a devastating earthquake. Isabel and the ex-upstarts must join with the town leadership to decide what to do, which is quite the burden on Isabel given the preceding fall of the Catchkeep priest, who used to lead in times like these.

What follows is a harrowing journey for not only Isabel but the town at large, when events unfold in a way that threatens not only their physical town but their ultimate survival. As always, life is fleeting in the Waste, and Kornher-Stace does not shy from a realistic loss of life in the ensuing confrontation, which left this reader's heart thumping. Fans of the ghost and Foster can rest assured that the dynamic ghost duo makes a return, and in circumstances that challenge Isabel to once again reconsider her relationship with ghosts and this time, how the citizens of Sweetwater should view them, too.

A satisfying sequel that takes a little while to get going, but once it does, is a late night page-turner.

(We received an ARC in exchange for a fair and honest review.)

View all my reviews

Email ThisBlogThis!Share to TwitterShare to FacebookShare to Pinterest
Labels: Book_Reviews, Melanie Conklin, YA