Trust Me, Pal, Kissing Is Awesome

My daughter is six.  Before she was born, my wife and I swore a pact.  We would do our best to not make her entire universe pink.  So, under a full moon in the wee hours of December, a light blanket of snow dusting the pre-dawn blue of the world, she was born.  Through her infancy and into her toddler-hood, we clothed her in greens and oranges and blues (BLUES!!) and purples and browns and reds and yellows and, yes, sometimes pinks.  She was like a little walking and not yet talking Benetton advertisement.  We would not be consumed by the pinkification of our little girl!  We would lead a revolution!  Vive le resistance de rose!

She learned to talk, practiced words, and soon became quite adept at stating her little opinions.  She had favorite shows (Wonderpets, Wonderpets, We're on our way!), favorite songs, favorite vegetables, and restaurants.  She was quite suddenly a little human being.  And yet, favorite color...to this day...pink.  PINK! PINK! PINK!

Two and a half years later, our son burst into the world wrapped in colic.  Three months of howling and screaming and sleepless nights consumed us.  We barely had time to remember to brush our teeth never mind trying to be so forward thinking in the color of our boy's attire.  Still, we had enough left in the tank to be somewhat strategic.  Sure, he was covered in blue onesies emblazoned with robots and superheroes but if he wanted a dolly or a Barbie or to be a fairy for Halloween, we were all over it.  Still, despite our best gender equity based intentions, our boy likes to crash headlong into stuff. He dangles off the top of our playset and says he's a monkey. He destroys things with devilish abandon.

It was time to face the facts...nature was beating the snot out of nurture.

So, we then come to this.  If nature was playing such a significant role in my son's love for all things explosive, how do I get my boy, once he gets a few more years under his belt, to appreciate books that look like this? 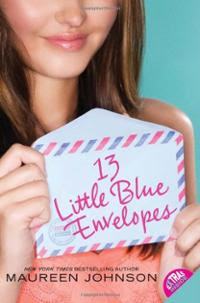 I used Maureen Johnson because she recently raised this issue herself.  If you aren't already, you should probably start following Ms. Johnson on Twitter because a) she's a riot b) she's witty and c) she occasionally posts stuff like this: 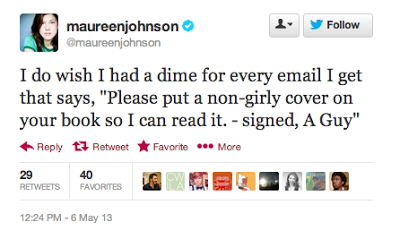 She laid down a challenge to her wide fan-base - play publisher for a minute and flip some popular book covers.  If the cover seemed decidedly masculine, make it feminine...and then do the same for the reverse.  I don't have time to chase down all the image rights for the ridiculously creative covers that people created but just go do a quick search for #coverflip on the old Google.  I'll wait for you.

So, to get back to our conversation from earlier, I bring you to the subject of my son. One of the first thoughts that you may be having is "What about your daughter?"  Well, I don't think that girls have the same issue as boys.  I am a teacher and, let me tell you, girls will read anything.  Massive tentacle encrusted giant on the book's cover eating the bones of unfortunate sailors while our hero falls from the sky with a flaming sword aimed precisely for the gargantuan's one good eye?  Are you kidding, Mr. Adams?  I'm all over that!  Most girls that I run into don't care if it's Harry Potter or Katniss Everdeen or Elizabeth Bennet or Iron-Man, if the story is good, they'll read it.

So, if we could please focus our thoughts on the so many boys out there in the world who are not getting their fair share of reading experiences (especially ones where things get kissed more than things get blown up...or zapped...or Avada Kedavra'd).  Because the issue doesn't seem to be wrapped up in who the main character is.  Boys in my classes love The Hunger Games, Graceling, or The Cavendish Home for Boys and Girls.  It's not about the protagonist being male or female.  It's something different. For most of my boys, if I can get them past the cover, I'm golden.

I'm writing books right as we speak and I try to fill them up with characters, both male and female, who are daring and brave and complex and I'm hopeful that those characters will appeal to both boys and girls. Still, I wonder, and this is where we get back to our old arch-nemesis, what would happen if my book (a book about kids and evil octopuses and saving the world) had a pink cover?  Pink.  PINK! PINK! PINK!

I hate to cave-in to stereotypes (especially ones that are so wrapped up in something as silly as a color) but, let's face it, pink is a tough one for boys to swallow.  As much as I'd like to shake away the confines of a color from my son's world, I have to face the facts.  Modern society has given pink a lot of baggage.  Baggage that doesn't come with blue, who no longer seems quite so gender identified, or purple or orange (I mention orange being that it is my son's favorite color).

I'm not here today with answers.  I'm just a guy writing books for kids.  But, someday not too far down the road, I'm hoping to be having conversations with my future publisher about what my covers should look like.  So, what weight do book covers carry?  What burden are we asking our boys to carry when we hand them a girly book cover?  What do you think?