One of the best pieces of advice I've heard for writers: read at least 50 books in your genre. Well I say GO BIG OR GO HOME, FOOL--shoot for 500! What, you don't have time? Oh boo hoo hoo; waily, waily, waily!

Ahem. My editor tells me I need to be "less of a poopy-pants" to my "esteemed readers". So what I meant to say: aw, that's too bad; I'm so sorry you have so many other things going on*.

A book makes my second tier if it has an appealing concept along with excellent plot, characters, and scene-setting. But to gain entrance to the vaunted Top Tier, it has to be near perfection. As my writing group knows, I'm not bashful about delivering constructive criticism, and Top Tier picks are ones where not a single major piece of feedback came to mind.

I read to my niece once a week, and at one point I was going to give myself a Vulcan nerve pinch if I had to read about another fairy princess riding ponies on pixie dust rainbows. Luckily, CLEMENTINE came along.

Sara Pennypacker captures the essence of the hilarious-without-knowing-it eight-year-old; a sweet story packed with fun. Clementine's voice sings through the chapters, showing us the world through her eyes as she navigates the oddity of adult behavior. A modern-day Ramona Quimby. 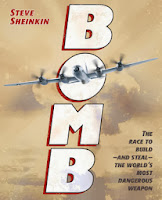 BOMB: THE RACE TO BUILD--AND STEAL--THE WORLD'S MOST DANGEROUS WEAPON

This work of non-fiction weaves WWII subplots in recounting the creation of the atomic bomb. Packed with intrigue, spying, and explosions, I felt at every moment like the very fate of the world was up for grabs.

The stories of the Norwegian freedom fighters were particularly impressive. Imagine being airdropped into a blizzard, landing way off course, and being responsible for transporting not one but TWO 70-pound packs each. And if they didn't succeed in their mission to blow up a heavy water plant, the Germans might have developed the bomb first. Talk about high stakes.

If only this book had been available when I was a student, I might actually know something about WWII besides who won. Schools, are you listening?

An oldie but a goodie, I thought I had covered most of the important Newbery winners and honors. But this true tale of a boy who adopts a baby raccoon and raises it as a pet was an easy addition to my Top Tier list. Sterling North describes his year with Rascal with such innocence, I got nostalgic for life in an earlier era. The prose does have an older feel to it (written in 1963) but possesses a timeless quality which stands up even in today's norm of all-action all the time.

In this alternate reality story set in the heart of the Cold War, the U.S.S.R. drops the atomic bomb on us. The one family on the block crazy enough to build a bomb shelter runs for their hatch, but six neighbors break into the house and brawl their way in. Ten people + a bomb shelter only made to support four = heart-stopping tension.

I started it at bedtime and finished at 3 a.m, unable to avert my eyes. This, my friends, is the definition of a Top Tier pick. And a very cranky Jeff the next day.

THE HOUSE OF THE SCORPION

Also falling on the border of MG/YA, this Newbery Honor doesn't pull any punches just because it's written for kids. Matteo Alacrán is a clone of a drug lord who controls a new country, Opium, separating the US and Mexico. As a clone, Matteo is treated worse than an animal until his namesake finds out about it and elevates him to favored status. But when Matteo uncovers the truths about his existence and the drug lord's ways, his world is flipped on its head.

Full of memorable characters and nightmarish settings, it was un-put-downable. Not for the faint of heart MG reader though!

ARISTOTLE AND DANTE DISCOVER THE SECRETS OF THE UNIVERSE

I wanted to dislike this book. I really did. I mean, it's all about waily waily waily feelings and stuff! But Aristotle's voice hooked me, and seeing his friendship with Dante develop into something wonderful, painful, symbiotic, hurtful, and beautiful, kept me thinking about the characters for days after.

It's rare for a book to surprise me, but I re-read the last chapter many times because I was so astounded (and because I missed everything that had been so blatantly obvious). It was so compelling I read the entire book again.

THE GOLEM AND THE JINNI

My recent bout of fantasy-fatigue didn't bode well for this book. I went in with a "I guess I should read this" attitude, but to my pleasant surprise, I was blown away. The premise is so unique, so fresh--two mystical beings given life but forced to fend for themselves when events happen to their masters--that I couldn't put it down.

Helene Wecker devises her scenes in such a natural way, I hardly realized I was inside a book. It takes place in turn of the century New York, and I actually felt like I was walking along the streets of Little Syria and the Jewish district. Masterful.


So there you have it. Happy New Year!