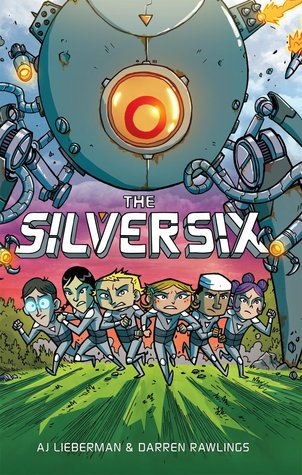 Tell us a little about yourself: what is your first name, how old are you, and what is your favorite flavor of ice cream?
My name is Perry, I’m 7 years old and my favorite ice cream is vanilla.

What book did you read and why did you choose it?
The Silver Six. I chose it because I read it once and it was really exciting.

Can you describe this book in one word?
Crazy!

What was your favorite part of this story?
I was really excited when we read the part where they finally got out of the orphan building. I thought the guards were gonna get them, but I was wrong.

If you had a problem similar to the main character's problem, what would you do?
If I had an old paper with a microchip I would find a really old computer and rip the paper and try to run the registry through it.

What would you say to your best friend to convince them to read this book?
I would say that it's really exciting and some pretty crazy events happen in it. And I liked it when I read it because, like, just six little children flying ships and blowing up a ginormous robot was pretty amazing.

What do you think about the book's cover?
Well, when I first looked at it, I thought that they were gonna be getting chased by a ginormous robot and I actually was kinda wrong because most of the robot wasn't really the main thing in the story. I thought it was okay, because I found other interesting things like they were trying to find out what the registries were about and I would have tried millions of things to find it out and it wouldn't have worked. But they were really smart.

Can you name another book that reminds you of this one?
I actually can't remember one because I haven't read any other books about having to find out about something like this. But when I saw the cover, I thought, Hey! This kind of remembers me of The Robot and The Kid.

If you could ask the illustrator one question about this book, what would it be?
Well, I first was wondering how did he draw such good pictures? Did he look at a photo or did he make this entire place up? Like, how did he draw such a good robot if he had to make the entire thing up?

We contacted Illustrator Darren Rawlings and asked him Perry's question. Here was his awesome reply:

Great question Perry!  And I'm glad you like my drawings!

Like anything you do in life, it takes practice.  I've been drawing since I was a boy your age.  All day, every day, I would be drawing.  And I probably shouldn't say this, but even during math class, I'd be drawing in my notebook.  It was something I loved to do and my mom always encouraged me to do what I loved.  So as I grew up, I studied art and learn how to do it well.  Everything you see in the book I created.  It came right from my brain!  (with the help of my amazing writer friend, AJ Lieberman of course!)

I'm able to draw that stuff because I've spent years drawing from real life and filling my head with ideas, like studying, so that when I need to draw them, I know what they should or could look like.  For example, drawing a cool robot or spaceship might mean that I've looked at and practiced drawing things like airplanes or construction vehicles.  Then, I just use those things I've learned while drawing them, and make up my own inventions, like the giant robot that chases the Silver Six!

...Oh, and some vanilla ice cream might help as well!

***
Thank you Perry for sharing The Silver Six with the Kidliterati! Here's some bonus fan art from both Perry and his little brother Alec. As you can see, this story really captured their imaginations! 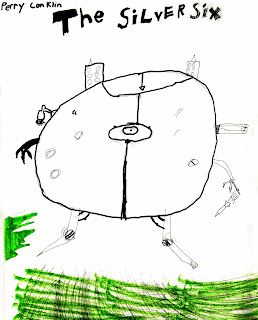 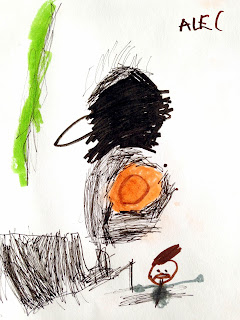 The Silver Six
A group of orphans on the run search for a new home among the stars.

When a group of orphans discover they have a common connection, plucky heroine Phoebe leads them in a daring escape from their orphanage to an uninhabited moon. But their idyllic paradise is shattered when the powerful corporate boss who caused the deaths of their parents sends a relentless henchman to track them down. Now, with nowhere left to turn and tired of being on the run, these resourceful kids decide there's only one thing left to do: Fight back!