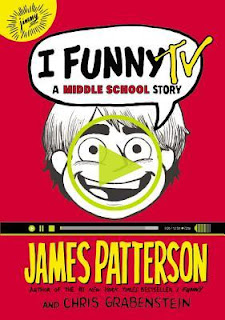 Tell us a little about yourself: what is your first name, how old are you, and what is your favorite flavor of ice cream? My first name is Sophia, I’m 13 years old, and I like mint chocolate chip ice cream.

What book did you read and why did you choose it? I read
I Funny TV: A Middle School Story by James Patterson and I chose it because it looked very interesting and funny (hence the title.)

Can you describe this book in one word? Rollercoaster.

If you had a problem similar to the main character's problem, what would you do? The main character's problem was he had a show that he had the chance to do. It was all about his life and called Jamie Funnie. The reason why he got a chance to do this show, was he won a comedy contest and the prize was 1 million dollars. So, he signed a contract claiming the million dollars. What he didn’t know was that he also signed to be on the TV show. So, he either had to be on the show, or give back the million dollars (most of which he already spent on his family). If I were in this position, I would probably do the TV show. I wouldn’t want to give back the million dollars, especially if I had already spent a lot of it on my family.

What would you say to your best friend to convince them to read this book? I would tell them how funny it is and how it would cheer them up if they were having a bad day.

What do you think about the book's cover? It has really eye-catching colors (red and yellow) and the title is a speech bubble that looks like Jamie is saying it. It definitely caught my eye.

Would you want to read another book about these characters? Why or why not? I definitely would. The characters are so interesting and funny and I feel like there’s a lot more to learn about, which I could learn in another book.

Can you name another book that reminds you of this one? Probably Counting By 7s by Holly Goldberg Sloan. They’re similar because the main character in both of them is facing a physical disability, yet they don’t give up.

If you could ask the author one question about this book what would it be? If I could ask James Patterson one question, it would be ‘Most of your books are crime/mystery stories. What inspired you to write a kids comedy book?’
Thank you, Sophia!
I Funny TV: A Middle School Story
by James Patterson

Jamie Grimm has finally accomplished his dream of proving himself the Planet's Funniest Kid Comic, and the sky's the limit from there. Enter a couple of TV executives with a huge plan for Jamie: a new show about Jamie and his oddball friends! But when Jamie struggles to learn the acting ropes, will it be an early curtain call for the biggest show of the decade?